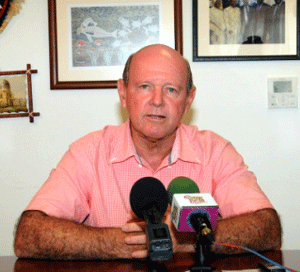 The University Gardens at the University of Medellin has been selected as the site for the IIPT (International Institute for Peace through Tourism) International Peace Park commemorating the UNWTO 21st General Assembly. The Peace Park will be dedicated on Friday, September 11.

The IIPT Peace Park dedication is the second at a UN World Tourism Organization (UNWTO) General Assembly with the first being the re-dedication of the IIPT International Peace Park at Victoria Falls on Opening Day of the 20th General Assembly, jointly hosted by Zambia and Zimbabwe in August 2013.

All delegates to the 21st UNWTO General Assembly have been invited, including the media – local, national, and international.

Also speaking briefly will be Minister Alain St. Ange, Minister of Tourism and Culture, Seychelles; Mr. Rafael Millan Perez, Executive Committee Member, Skal International; Prof. Geoffrey Lipman, International Coalition of Tourism Partners (ICTP); and Dr. Louis D´Amore, IIPT Founder and President. Minister St.Ange of the Seychelles said that he was honored to have been singled out by Dr. Louis D’Amore and his IIPT Committee to address the International Peace part Commemoration ceremony and to plant a tree. “We are but a small country in the big tourism family and feel humbled to be chosen to be with the Secretary General of the UNWTO and other greats from the world of tourism at such an important event. We say thank you to Dr. Louis D’Amore,” said Minister Alain St.Ange of the Seychelles.

Ms. Stella Agudelo Sánchez will serve as Master of Ceremony, welcoming distinguished guests and delegates of the 21st General Assembly. IIPT is most pleased to have the Schola Nova Children´s Choir joining us to perform a series of songs during the dedication.

Seychelles is a founding member of the International Coalition of Tourism Partners (ICTP) .

2015-09-11
Georges
Previous: Brazil’s popular television personality speaks to Seychelles Tourism Minister about her resent stay in Seychelles
Next: Weightlifting and badminton win golds for Seychelles at the 2015 All-Africa Games