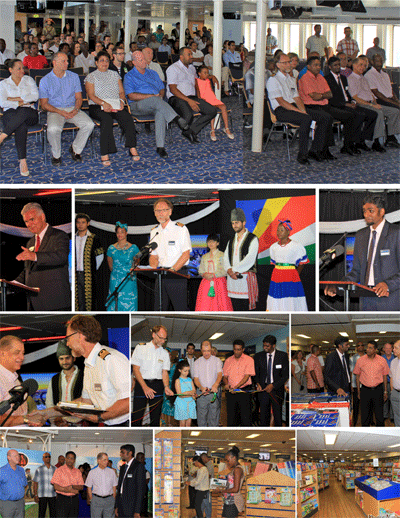 Seychelles welcomed the largest floating book fair, the Logos Hope at Port Victoria during the last weekend, as it made its maiden voyage to the islands. President James Michel, Vice-President Danny Faure and the President’s daughter Laeticia cut the ribbon to officially open the book fair on Saturday in the presence of several ministers, high government officials, the ship’s crew members and other guests.

The captain of Logos Hope, Ed Verdeek presented President Michel with a token on behalf of all members of the ship, and thanked the head of state for welcoming the book fair to Seychelles.

Also speaking was the managing director of the ship, Seelan Govender who described the visit to Seychelles as a historic one, adding that Logos Hope’s crew members are delighted to be visiting the islands.

He said Logos Hope is not just a ship but it is a place of peace, and it represents a vision with a difference in the lives of people. It also brings people of different nationalities and cultures together.

Before the official ceremony ended, those present had the chance to view a video on the world’s largest floating book fair and how it has touched the lives of many people across the globe, a Korean fan dance and a display of several nationalities being represented onboard.

Members of the public in Seychelles have until November 25 to visit the book fair and wide range of quality literature onboard for young and old alike.

MV Logos Hope is a ship operated by GBA Ships e.V is a charitable organisation based in Germany.  After leaving Seychelles, Logos Hope will be heading to Mauritius and Madagascar, before going to the east, south and west of Africa. The ship will later be sailing to the Carribbean islands.

Seychelles has also welcomed another floating book fair on board the famous Doulos ship three times in the past ̶  in March 1993, May 1995 and in 2005.