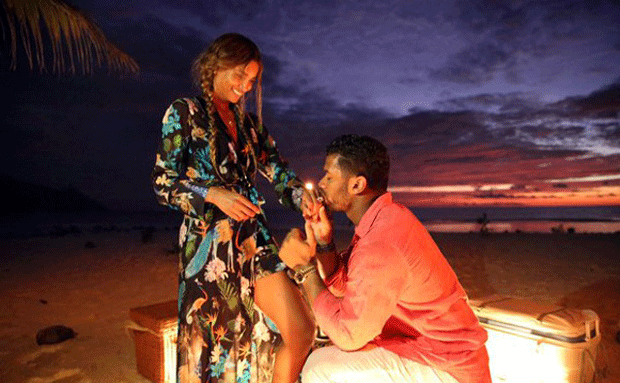 Russell Wilson dropping to one knee to propose to singer-girlfriend, Ciara at North island in Seychelles. (Ciara/Twitter)

The Seattle Seahawks quarterback Russell Wilson popped the big question to Grammy-award-winning singer Ciara while visiting the Seychelles islands. The answer: Yes! The couple have been posting news of their engagement on social media sites, Twitter and Instagram since Friday.

Celebrity news magazine ‘PEOPLE’ reported being told exclusively by Ciara’s representative that Wilson had planned a surprise holiday to the Seychelles, more precisely at the North Island Resort, which is where he proposed to Ciara.

North Island is a popular honeymoon destination among the rich and famous. Celebrities who have honeymooned at the luxury resort include the royal couple Prince William and Kate, Duchess of Cambridge.

Pictures posted by the couple on Twitter, Instagram and Facebook show Wilson taking to his knees on a beach setting, against the backdrop of the setting sun to propose marriage to his girlfriend. The pair have been dating since early 2015. 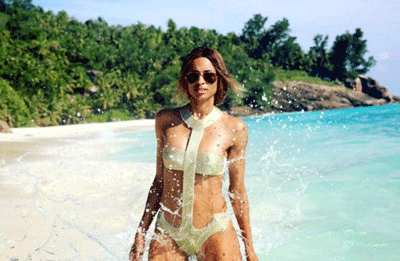 The American couple have been posting snaps of their island getaway to update their fans and followers on social media sites, Twitter, Instagram and Facebook. (Russell Wilson & Ciara/Twitter) Photo License: All Rights Reserved

‘She said yes!!!’ wrote Wilson as he posted a short video on Instagram showing a happy and emotional Ciara revealing her diamond engagement ring. Ciara also expressed her joy, saying ‘I feel complete!’

Ciara, who released her sixth studio album in May 2015, has been nominated for five Grammys, winning one for best short-form video. Wilson is one of the top quarterbacks in the US’ National Football League, or NFL. Last year he signed a four-year contract extension worth a reported $87.6 million with the Seattle Seahawks.

The couple have been updating their fans and followers on their romantic break, posting snaps of fishing trips as well as photos of themselves against the backdrop of Seychelles’ greenery, powder-white beaches and turquoise waters.

Wilson, 27, has been married once before and Ciara, 30, has a 22-month-old son from a previous relationship.

According to ‘PEOPLE’ the couple have publicly made known their stance to abstain from pre-marital sex, ever since their relationship was made public last year. They have yet to announce their wedding date.

2016-03-15
Georges
Previous: A cup of herbal tea
Next: STA steps up move toward autonomy