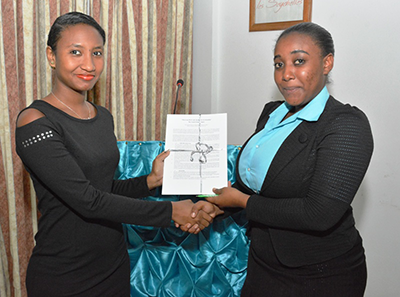 The Seychelles National Youth Assembly (SNYA) met on Saturday for a special sitting as part of the Youth Festival celebrations.

The order of the day’s sitting were a resolution on a document on the youth’s sexual reproductive health and rights, two motions and the launch of an SNYA logo competition (see separate story on the competition).

The sitting took place in the presence of Dr Anne Gabriel from the Ministry of Health, Anael Bodwell, representing Youth Action Movement Seychelles and Global Shapers, board members of the Seychelles National Youth Council (SNYC) and other observers.

Honourable Jellisa Julie from the University of Seychelles presented a motion to pass the resolution on a document asking the National Assembly to consider the youth’s recommendations on the sexual reproductive health of young people in regards to laws and legislation, access and education.

The two-page document was adopted by the SNYA and different youth groups at an intergeneration dialogue held on July 29. The document was presented by Anael Bodwell to the Speaker of the youth assembly Shamira Basset, who accepted it on behalf of the honourable member of the National Assembly for Roche Caiman Audrey Vidot who was not present due to other commitments.

Honourable Vidot has been mandated by SNYA to advocate the youth’s recommendations to the National Assembly.

In the document, the youths are asking that Seychelles and its youth achieve universal access to sexual and reproductive services, including for family planning, information and education and the integration of reproductive health into national strategies and programmes.

As statistics show that young people as young as 11 years are engaging in sexual activities, the document recommends the age policy for contraceptives to be lowered as it is currently allowed only to people of 18 years.

The youths are also asking for condoms to be made available in suitable places accessible to young people especially at secondary and post secondary schools, for rapid HIV/Aids testing for young people under 18 years, policies against sexual discrimination of any forms, policies against bullying and discrimination to people living with HIV/Aids people and to revise the current sentencing for child abuse to increase it to 25 years imprisonment.

They are calling on the National Assembly to involve the youths in consultative meetings to discuss openly on sexual issues and for more youth-to-leader consultations with them and other key partners. Honourable Damien Mougal from Ile Perseverance who seconded the motion said that in Seychelles while more than half of the population is engaging in sexual health reproductive activities, it is shocking to learn that the subject is still a taboo.

“What we need now are solutions.  Solutions like this document. Committing to a world of zero HIV infection, zero Aids related deaths and zero discrimination should not be an option but it should be the duty of every generation,” he said.

Deputy Speaker Ria Alcindor also talked in favour of the document, saying “the examples of these recommendations show enough evidence that the youth of our country are full of ideas that can contribute positively in our country”.

Honourable Joseph Bonne said with the continued increase in underage pregnancy, HIV infections and other sexually related diseases among young people the document has a lot of policies that will address such issues.

The motion was passed by the majority.

A second motion by Honourable Kieran Socrate from La Digue demanding that government re-look into the points system for the allocation of houses for the benefit of young people, was postponed to the next sitting as members voiced out that they were not able to get enough information from the concerned ministry to debate on the motion.

The third motion by Honourable Neddy Port-Louis from Pointe Larue which was also approved by the majority, called on the Committee for Outer Islands in the National Assembly to make it easier for the youths to visit the outer islands. This, according to the motion, would help them to learn more about the islands.

Honourable Port-Louis said it is a dream for most Seychellois to visit the beautiful islands of Seychelles but the cost is exorbitant to the disadvantage of all youths.

He suggested that the National Assembly meet with the SNYC as well as with the Islands Development Company and see what are the possibilities available so that our youths could pay an affordable price to visit the outer islands of Seychelles.

Five other members spoke on the motion and all stated that the islands have rich histories and which are of great benefit to the youths and if the youths can’t visit and explore the islands, it will be only history in books stored on the shelves with no value.

Saying that it costs around R5000 to visit the islands closest to Mahé and between R38,000 to over R100,000 to visit those further away, they all said it is too expensive when compared to the cost of visiting foreign countries.

The young parliamentarians said that a way should be found so that young people get to visit those islands as it will also motivate them to go and work there.