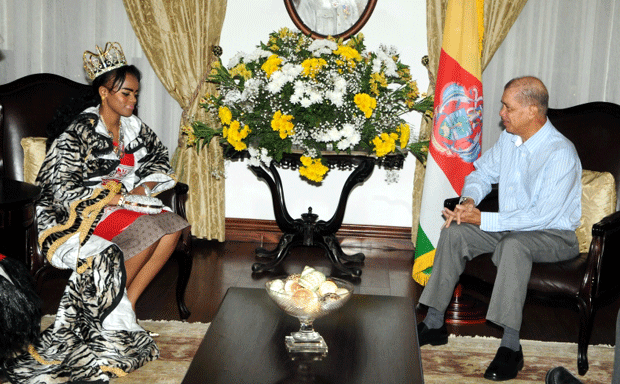 Present as head of her country’s delegation for the Carnaval international de Victoria which kicks off this evening, Her Royal Highness Princess Sikhanyiso of Swaziland paid a courtesy call on President James Michel at State House yesterday morning.

The first of his father’s 30 children – King Mswati III who has 15 wives – Princess Sikhanyiso has an important role in the Swazi society. This is because she bears the title of chief maiden, meaning the queen of all females. In this capacity, she serves as role model and advisor to other women.

Princess Sikhanyiso was accompanied by Minister for Home Affairs of the Kingdom of Swaziland, Her Royal Highness Princess Tsandzile Dlamini and the Hon. David Ngcamphalala, the Minister for Sports, Culture and Youth Affairs.

“Whilst the event showcases our nation as a true melting pot of cultures and a truly unique place it showcases also other different civilisations, customs and cultures in their diversity. We can use the strength of this diversity to promote tourism and other elements of our development agenda. This event is also significant in terms of the development ambitions and visions our two countries share,” said President Michel.

In an interview with the press after her presidential meeting, the princess said this task involves advising her female peers to live a life of chastity, to bring young women together to discuss relevant issues and to help them in the areas of health and education.

She said she has been honoured to meet President Michel and has discussed with him areas of eventual cooperation between our two nations. These include tourism and trade.

Princess Sikhanyiso has also announced that her father has officially invited President Michel to visit Swaziland and to attend an important cultural event in the kingdom situated between South Africa and Mozambique.

Asked of her impressions of Seychelles, this is what the princess had to say:

“Here I see lovely and exotic people who remind me of people in my own country. You have refreshing weather compared to the cold weather of my country and altogether Seychelles makes a beautiful honeymoon location,” she said.

During the coming days, the Swazis will surely add to the beauty of Seychelles with the glittering cultural display they have promised for the carnival.