The power of theatre for development and social change 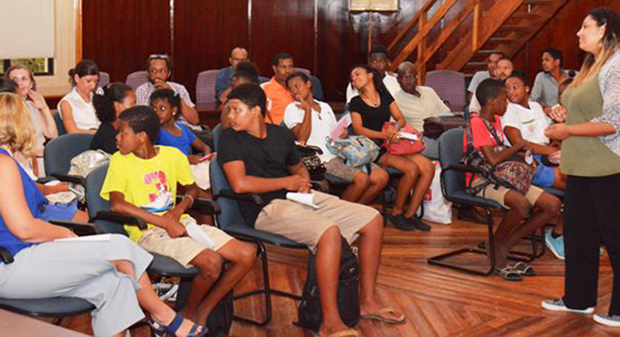 Can the theatre and the arts play a significant role in reducing social ills in Seychelles? Are creativity and culture accessible to people who are marginalised and miss certain opportunities for social development?

According to a lecture entitled ‘Power of Theatre for Development and Social Change’ facilitated by Alexandrina Faure, the answer is yes.

Theatre for Development (TfD) uses live performance as a development tool, whereby theatre is practiced with the people or by the people as a way of empowering communities, listening to their concerns and providing them with ways to express themselves.

The concept was initially inspired by Paolo Freire, a Brazilian cultural and educational theorist, who was persuaded that people could be stimulated to become conscious of their situations and generate knowledge in their own interests. It is derived from a community’s wants and their needs, and those who have benefitted from such programmes often gain in self-confidence.

Alexandrina Faure, who holds a Bachelor of Arts degree in Drama and Theatre, states that she believes theatre for development can indeed be used to impact communities and bring about social change in the local context.

“Already with Word Up, an inclusive open-mic project I organise with Colin Woodcock and others, we have changed some people’s lives. I think in the world now we do not value creativity and we do not value the arts as much but they have so much power. It’s a very inclusive, non-conflict way of dealing with issues, having discussions and working with people. You can communicate a story; you can communicate very easily by using art.”

During her one-hour and a half lecture Ms Faure touched on areas such as the difference between the normal form of theatre and theatre for development and how TfD can play a defining role in the lives of those most vulnerable in the society.

Video presentations depicting successful Theatre for Development projects in certain parts of the world were also viewed by the audience during the lecture.

Those in attendance had the opportunity to interact through group discussions where they were asked to discuss pertinent social ills in Seychelles and the ways they can be mitigated through TfD. These were enriching in parts and also culminated into heated debates about the efficacy of such an ambitious proposal in Seychelles.

Kurt Lagrenade brought his drama students from the National Conservatoire of Performing Arts (NCPA) along to this lecture and said he did so to provide them with a variety of ideas and opinions which could only benefit their studies.

Nandita Nair, another audience member who is always faithful to these culture talks hosted by the Ministry of Youth, Sports and Culture, said: “I think we are going in the right direction, with events like these for example where we can actually talk about the benefits of art and why it is important to a society. And I think the next step would be letting the people who have the resources to give us also aware of how to tap into the talents of the people in Seychelles,” Ms Nair said.

Ms Faure’s philosophy may seem idealistic for a our small country but she remains firm in her stance that every one of us are artists and that the Seychelles art scene would only flourish if it is well funded and proper facilities are made accessible.