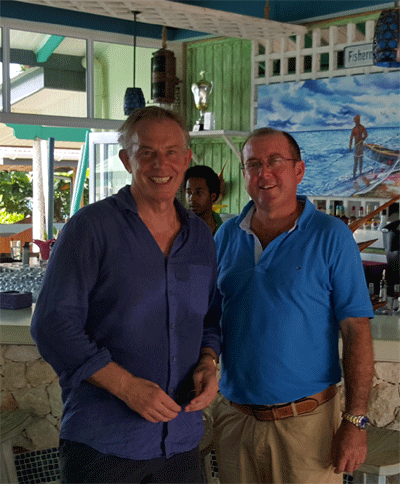 The former Prime Minister of the UK was spotted at the Fish Trap Restaurant on the island of La Digue in the Seychelles as he and Carl Mills, one of the restaurant owners were taking a souvenir picture.

Tony Blair has holidayed in Seychelles when he was still Prime Minister of the UK, but this time it was a Tony Blair totally on a private visit taking in the sights and sounds appreciated by visitors to these mid-ocean paradise islands. “This is Tony Blair and he is moving around the islands freely on his holiday” said a British couple who were on a day visit to La Digue.

La Digue Island remains the popular islands for visitors holidaying in the Seychelles. The islands is currently on a mission to become the eco-friendly destination of the Seychelles. Recently battery operated golf-cars were introduced to the island in a bid to make it more environmentally friendly and government have also moved in its last budget to remove import tax on bicycles, a popular means of transport on the island. Until the arrival of trucks, it was the traditional oxcarts that were used as the main means of transport.