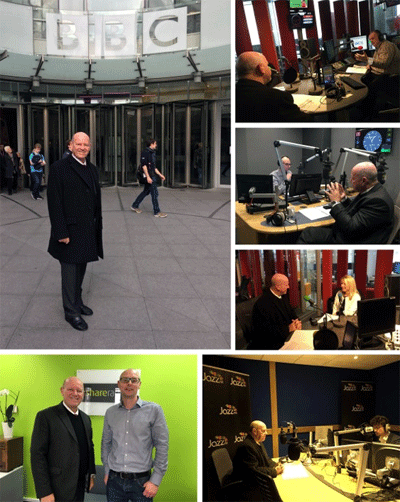 Minister Alain St.Ange, the Seychelles Minister responsible for Tourism and Culture hit four radio programs on a transit stop in London on his way to the ITB Tourism Trade Fair in Berlin. “It is like a blitz to get Seychelles as visible as I can” Minister St.Ange said.

The interviews gave the Tourism Minister a golden opportunity to showcase the beauty of Seychelles, talk about tourism development plans and the growth experienced by the islands in that industry.Minister St.Ange gave tips to the different listeners on how to enjoy a Seychelles holiday by giving tips on the key USPs of the Seychelles. He explained that Seychelles was not only for the people’s of the world bust also had comfortable affordable accommodation establishments saying that the ‘haut de gamme’ upper end visitors arrived in private jets or using First or Business Class seats in airlines whereas the whole tail or economy of the airlines were booked by the traditional travellers seeking a cultural flavoured holiday, and they were today being accommodated in the home grown Seychellois establishments. He spoke about the UK as an important tourism source market and emphasised that the UK holiday makers know the Seychelles and appreciate these islands they know. “We were a British Colony until 1976 and we have maintained at Independence the Legal System and the rue of law, we drive on the left like you do and we have the english language as one of our National Languages” said Minister St.Ange as he was on air. The Minister also developed the importance of the tourism industry going back to 1972 where Her Majesty the Queen officially opened the island’s International Airport.

“The interviews were organised by our London Offices and it was a great opportunity to remain visible in a market that was experiencing growth”sa id Minister St.Ange who also appeared on CNBC International TV and interviewed on the Squawk Box Europe, CNBC’s Flagship Shop by the Channel’s Anchors Geoff Cutmore and Karen Tso.   He was also interviewed for a feature report by TTG Media group at their Friar’s House on Blackfriars Road Offices.

2016-03-14
Georges
Previous: Traditional Fishing
Next: ITB Tourism Trade Fair in Berlin was the opportunity for Seychelles to increase its visibility through press interviews including an interview with MBC TV (Middle East Broadcasting Corporation)