Tourism Ministers from Africa meet at UNWTO Headquarters in Madrid

Ministers of Tourism from Africa who were in Madrid for FITUR 2015 were all invited to the a Ministerial Meeting with Taleb Rifai, the Secretary General of the UNWTO (United Nations World Tourism Organisation) at his offices in Madrid. 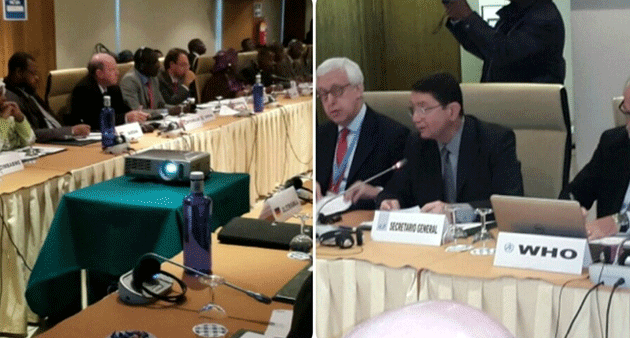 This followed the Investour and CasaAfrica Conferences where the focus remained on the development of partnerships in the business sector for European Businesses.

The Ministerial meeting that was chaired by Taleb Rifai saw at the UNWTO Headquarters was an opportunity for the Tourism Ministers from Africa to discuss openly with the Secretary General of the UNWTO and his Team on proposed plan of actions that could be beneficial to Africa. The close session meeting was also the opportunity for the Ministers from Africa to discuss the ‘Brand Africa’ concept that has been on the table for a while. On this a follow up meeting is expected to take place in Ghana later this year.

Ministers present congratulated Taleb Rifai for the initiative that brought so many Tourism Ministers from Africa together. Present also was Elsia Grandcourt, the Director for Africa at the UNWTO, and representatives from WHO, Germany and Investour.