Breaking News
Home - news - Tourism Ministers gather in Madrid for High Level Meeting on Tourism and Security – Minister Alain St.Ange of the Seychelles speaks of need to work with the press to defend ‘Right to Life’ and ‘Right to Economic Survival’.

Tourism Ministers gather in Madrid for High Level Meeting on Tourism and Security – Minister Alain St.Ange of the Seychelles speaks of need to work with the press to defend ‘Right to Life’ and ‘Right to Economic Survival’. 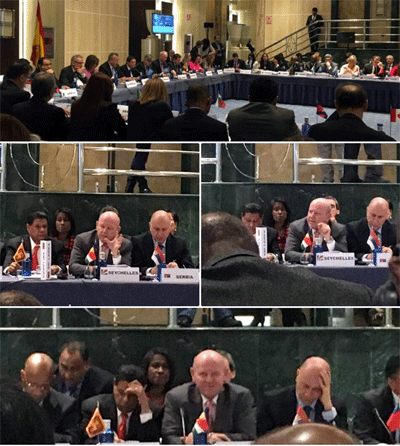 Tourism Ministers and Heads of Tourism from 86 countries responded to the call for a meeting initiated by El Salvador and the Seychelles. These were the words of Taleb Rifai, the Secretary General of the UNWTO (United Nations World Tourism Organisation) as he called the Madrid Meeting to order with Yuri Fedotov, the Executive Director of the UNODC (United Nations Office for Drugs and Crime) seated at his side.

As he opened the Ministerial Meeting on Tourism and Security, Mr Taleb Rifai, the Secretary General of the UNWTO spoke about the meeting that took place last year in El Salvador and congratulated Minister Alain St.Ange of the Seychelles for his initiative to write to him in November last year after the Paris terrorist attacks to call for a meeting of Tourism Ministers to look at tourism and security. “This is today a platform for exchanging views and information on how to promote a safe, secure and seamless travel environment that ensures the sustainable development of our sector” the UNWTO Secretary General said before adding that terrorism is a global challenge and needed to be faced at a global level.

Following official addresses by Dirk Glaesser, the UNWTO Director of the Sustainable Development of Tourism Programme, Sandra Carvao, the UNWTO Chief of Communications and Publications Programme and Carlos Vogeler, the UNWTO Director-Executive Secretary for Member Relations it was Minister Jose Napoleon Duarte, the Minister of Tourism of El Salvador who took the floor and related the meeting for the Americas that took place in his country to look at security and tourism stating that this regional gathering was an example that could be developed by other regions.

Minister Alain St.Ange, the Seychelles Minister of Tourism and Culture was next to speak and he was followed by over 25 more Tourism Ministers from the Community of Nations as well as David Scowsill, the CEO of the WTTC (World Travel & Tourism Council),  the Spanish Secretary of State for Foreign Affairs and four EU Parliamentarians.

The Seychelles Minister said that the 86 countries gathered for this High Level Meeting of Tourism and Security is demonstrating that this question is on everyone’s mind. “For Seychelles tourism is and remains the pillar of our island’s economy. This is why we are always working in partnership to ensure our tourism industry remains on firm ground” Minister Alain St.Ange said. Speaking off the cuff and from the heart as he normally does, the Minister from the Seychelles said that terrorism is a crime and this Ministers of Tourism could no longer just be bye-standers in this crazy uprising of terrorists and would-be terrorists. “Ministers of Tourism have the responsibility for the livelihood of the citizens of their respective country, this responsibility is the result of the importance of tourism in our very own economy and also in the world’s economy” Minister St.Ange said.

“Today we need to be opening a new dialogue with the press if we are going to find a way forward. We all know the problem but where to next? . A bomb in Paris, another one in Tunisia and the press provides updates and information through what we know the ‘Right to Information’ principle and through this giving the terrorists exactly what they want visibility and even more than appropriate coverage. We forget that exaggerated coverage is resulting in more such carnage and this results in the destruction of one’s ‘Right to Life’ and also the country’s ‘Right to Economic’ stability.  Difficult as this may seem, the time is now for us to sit with the press fraternity and place the situation as we see it on the table” Minister St.Ange said before adding that this was why he had written to Taleb Rifai in November after the Paris bombings to push for the meeting that was today taking place in Madrid.

The meeting came out with a number of resolutions and recommendations and David Scowsill of the WTTC (World Travel & Tourism Council) also confirmed that at the 16th Global Summit to be held in Dallas in early April the Tourism Ministers meeting with the press would feature on the program.  The WTTC, as representatives of the private sector and the UNWTO as the public sector were keen to remind the industry and Ministers of Tourism of the existing example in what is being called public / private sector partnership.