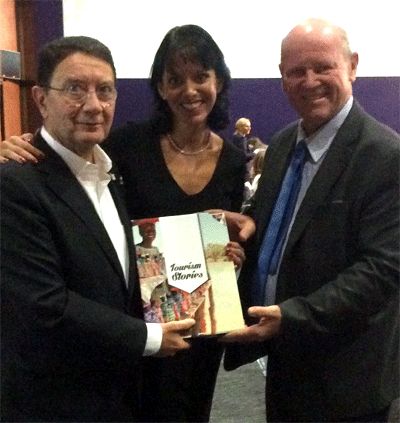 The UNWTO Tourism Book “My Story, My Community, Our Future” was launched on Tuesday during the Plenary Session of the UNWTO 21st General Assembly in Medellin Colombia by Taleb Rifai, the UNWTO Secretary General .

The 123 pages hardback full colour book has Anita Mendiratta, the trusted and respected strategic advisor and four time published author in Tourism & Economic Development as Editor. Anita Mendiratta is also the Founder and Managing Director of Cachet Consulting, an international consulting firm working closely with leaders in governments, private sector businesses and international organisations. Anita is today the Special Advisor to the Secretary General to the Secretary General of the UNWTO.

This new UNWTO Book is a follow-up to Tourism Stories, “How Tourism enriched my life” (2013). The UNWTO said when describing their latest book that this book is dedicated to all those impacting their communities through their work in tourism. The book shows how one person’s work has the ability to creatively unlock community value chains, proudly inspire the empowerment of women and revitalise history and traditions of the past to set the foundations for the future.

The Tourism Stories Book is created by the UNWTO to remind everyone of the heartbeats behind the tourism numbers  as the book captured 28 voices of tourism from countries across the globe – the people who, each and everyday, woke to work in their sector, playing their part, making their impact, and sharing their story. One such tourism personality covered in the 2015 Tourism Stories Book, “My Story, My Community, Our Future” is Jean Baptiste Hortere of the Seychelles.

Jean Baptiste Hotere is popularly known in Seychelles as Batista, a young boy from a small village in Mahe, who made good. He started his life working on a coconut plantation before moving in 1972 to the position of kitchen helper at the Reef Hotel at Anse aux Pins. After just one year in the job he was promoted to the position of assistant cook. In 1977 he left Seychelles to work in a hotel in England’s Isle of Wight and to then follow  a maritime course in France before being being employed as a cook abroad the vessel Aldabra, the first tuna fishing vessel ever to fish in Seychelles waters.

Jean Baptiste Hortere says in the book that despite his rich background of various experiences his dream was always to open his own restaurant.He started his dream by grilling fish caught in his own fish traps for tourists in true Seychellois island-style. “This proved to be a winning formula and soon I had people coming to my Chez Batista restaurant. The same way of doing things has allowed me to expand from the original six rooms and a rustic restaurant to 18 rooms today, a staff of 20 and room for 300 diners. Not bad at all for a simple village boy” says Jean Baptiste Hortere in the four pages dedicated to him in the book Tourism Stories, My Story, My Community, Our Future.

Alain St.Ange, the Seychelles Minister responsible for Tourism and Culture who received a copy of the book from Taleb Rifai, the Secretary General of the UNWTO in the presence of Anita Mendiratta, the Editor of the book said that he was honoured to see a Seychellois Tourism Personality being recognised and his work featured in the UNWTO Tourism Book 2015. “Seychelles has many great tourism achievers and we are proud of all of them. The recognition of Jean Baptiste Hortere comes just days before we inaugurate a Tourism Pioneers Park in the grounds of the Seychelles Tourism Academy and this will ensure that our tourism greats are never forgotten. On behalf of the Ministry of Tourism and Culture and our Tourism Board we say Congratulations to Jean Baptiste Hortere. We are proud of you” said Minister Alain St.Ange

2015-09-17
Georges
Previous: “Creole Festival 2015 will be an occasion to unite the people who live their culture” says Minister St.Ange of the Seychelles
Next: ‘We need to work together to better protect our tourism industry,’ says Seychelles Minister St.Ange