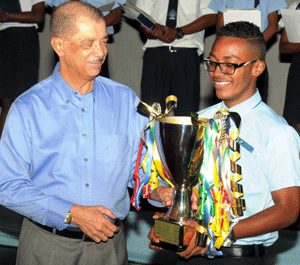 The Seychelles Tourism Academy (STA) held its graduation ceremony yesterday where Shaquille Denis emerged as the winner of the President’s Cup.

Shaquille, who has been following an advanced certificate course in tourism and tour guides, also won the Academic Best Performer award in his field of study.

For the first time this year, a new prize was also awarded, the Minister’s Cup for the most outstanding student in the tourism industry. And this went to Amelie Larame who was studying reception operations and services at certificate level. She received her prize from the Minister for Tourism and Culture, Alain St Ange.

Present at the graduation ceremony held at the International Conference Centre, were President James Michel, Vice-President Danny Faure, leader of the Opposition in the National Assembly David Pierre, the Minister for Tourism and Culture Alain St Ange, Minster for Labour and Human Resource Development Idith Alexander, the principal of STA Flavien Joubert, dignitaries and officials of the STA, of Shannon College of Ireland which is helping the academy with specialised training in tourism, tourism establishments’ representatives which have sponsored prizes for the event, students and parents. 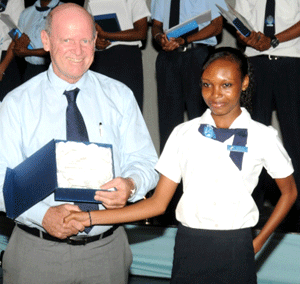 Apart from the usual cup and laptop from the President, Shaquille also received many prizes which include a scholarship to study overseas, weekend for two sponsored by Four Seasons Hotel, prizes from ISPC and Tooth booth.

There were also awards for best overall performers in the various fields of study on offer at the academy.

Stressing on the free education and monthly allowances provided by the government for them, Mr Joubert urged the graduates to use these opportunities to be what they want to be personally and professionally.

He mentioned the list of jobs available in the tourism industry which are plentiful and which they should make the most of.
He told them the country, the tourism trade need hospitality and tourism services character professionals and advised them to take these opportunities with pride. Their career opportunity in these areas is borderless, and there are no borders in what and where they can follow their career.

“Seychelles offers you best. So take these opportunities, shine, make your name and fortunes for you and your families. Remember success only comes to you who does not give up,” said Mr Joubert.
He then thanked all stakeholders for their continuous support to the academy.

Demi Camille of the tourism and tour guiding advanced certificate course delivered a vote of thanks on behalf of all students
Other highlights of the ceremony were the singing of the academy’s theme song ‘La Marche vers l’Excellence’, as well as song and kanmtole dance performances which are part of the cultural performances curriculum also taught at the STA. 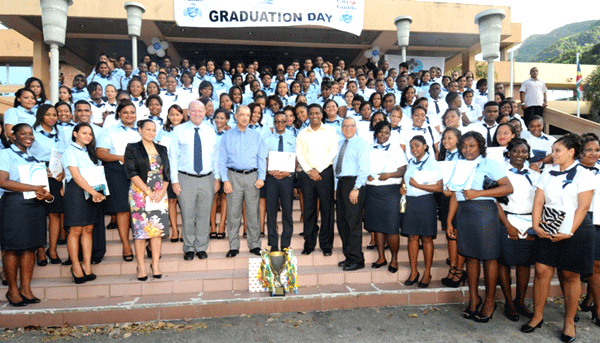 2015-05-29
Georges
Previous: Tourists coming to Seychelles have spoken through their comments on ‘Trip Advisor’ and the better properties have now been rewarded
Next: Seychellois youths prefer VIBES among SBC programmes