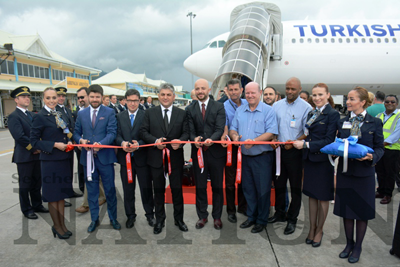 It will come in as flight TK 748 and fly back as TK 749. From Istanbul, the four-star airline can connect you to 291 other destinations worldwide, more than any other airline can offer. As its motto “widen your world” goes, Seychelles’ world has indeed widened since Monday when the airline made its maiden flight to the archipelago.

The Airbus A330-300 along with its passengers and crew members were treated to a warm welcome of water canon salute, traditional music and dance as well as a necklace of frangipane flowers after it had touched down at the Pointe Larue International Airport just after 9.30am local time.

The aircraft’s arrival was followed by the mapping ceremony where Seychelles was marked as the 117th country on the Turkish Airlines map. This was in the presence of the Minister for Tourism, Civil Aviation, Ports and Marine Alain St. Ange, principal secretary (PS) for Tourism Anne Lafortune, PS for Civil Aviation Ports and Marine Garry Albert, chief executive (CEO) of the Seychelles Tourism Board (STB) Sherin Francis, CEO of the Seychelles Civil Aviation Authority (SCAA) Gilbert Faure, chairman of the SCAA Board Captain David Savy and Turkish Airlines marketing officer Ahmet Olmustur, among other guests. 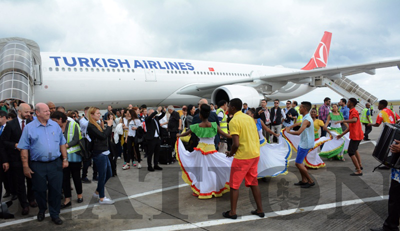 Mr Olmustur remarked that the flights will improve cultural and economic relations between his country and Seychelles, country which he said “is widely known as the best part of the world”.

“It does not take long to realise why Seychelles has such a stellar reputation worldwide. You go out of your way to put a stamp of quality in all that you do,” he said.

He added that the new air service will provide quality network and product through which travellers can now connect to the rest of the world.

Highlighting that the first flight carried visitors from countries such as Bulgaria and the USA, he added that it will also offer niche market opportunities to Seychelles.

With all seats on the inaugural flight almost taken and forward bookings far above the ground, Mr Olmustur was right to straight away announce plans to add more flights in the future.

It was Minister St Ange who, as his first official assignment since the weekend cabinet reshuffle, officially welcomed Turkish Airlines to our shores.

He described the new air link – which he said was the direct result of the Africa Routes Conference held in Seychelles in 2012 and where Turkish Airlines’ representatives were present – as “a boost for the tourism industry”.

Tourism as the pillar of the economy, he added, depends on good air access which has now been enhanced with one stop connection to any possible destination.

“We are building bridges which is needy for the tourism industry,” he said. 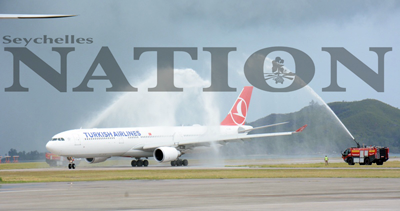 In this vein, Minister St Ange stated that Seychelles will continue to work with all other partner airlines so that both sides come out as winners.

He wished to ensure Turkish Airlines’ staff present that with Air Seychelles as the local handling airline, the country will offer all its support “for the good of the airline and the good of Seychelles”.

Mr St Ange concluded that only by flying to Seychelles could Turkish Airlines become the best:

“You say you are the best airline, but until you fly to Seychelles you cannot be the best. To qualify as best airline you must fly to paradise,” he said.