Ugandan music stars describe Seychelles as home away from home 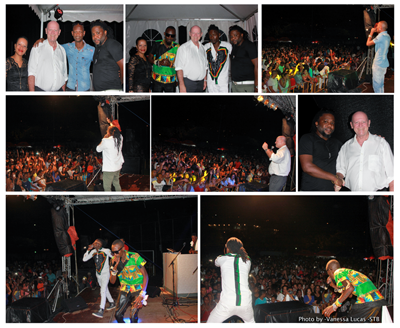 It was all about great music, top African beats and cheer at the mini stadium in their heart of Victoria last Saturday as Uganda’s top two music artists took Seychelles by storm. The little drizzles did not keep young and old from flocking to town for the musical show featuring Radio and Weasel.

The two young men from Goodlyfe crew as they are known in Africa continent were special guest artists at a musical concert held as part of this year’s Africa Day celebrations, FetAfrik.

Seychellois fans cheered as the duo performed top hits such as Magnetic, Amaaso and Breath Away among others. Well-known local artists in the likes of Elijah, Mercenary, Joseph Sinon and Jahkim were also performing their popular tracks during the show.

Speaking to members of the local media at the end of the show, Radio said they feel proud to have been given the chance to take part in such event in Seychelles which celebrates the African culture.

“We feel proud to be in Seychelles and we will surely be back in this beautiful paradise to perform again. Here, we are home away from home,” he said.

On his part, Weasel said Seychelles is a beautiful place and we appreciate the warm welcome and hospitality that we have received here. We have surely enjoyed our stay in Seychelles,” he said.

Radio and Weasel were impressed with the number of fans they have in Seychelles and how each performance was being welcomed by so much cheer from the crowd.

Moses Radio (born Moses Nakintije Ssekibogo) and Weasel (born Douglas Mayanja) started as backing vocalists for the Ugandan musician Jose Chameleone. In 2008, Moses and Radio formed the Goodlyfe Crew. Their songs have been successful on Ugandan radio, starting with Nakudata in 2008, the duo released Lwaki Onumya, Zuena, Nyambura and Bread and Butter.

Mauritian music artist Mr Love who was also among those performing that night, said he will go back to Mauritius with great souvenirs of Seychelles.

Next artist who is expected to perform in Seychelles is well-known dancehall star Konshens.

Present at the concert to give their support were the Minister for Tourism and Culture Alain St.Ange and principal secretary for culture Benjamine Rose. Minister St.Ange addressed the fans at the music show saying thank you for their continued support for the development of culture. He also congratulated Elijah for working closely with the Department of Culture to bring new popular artists to Seychelles as he blends in local popular artists in his great outdoor music shows.