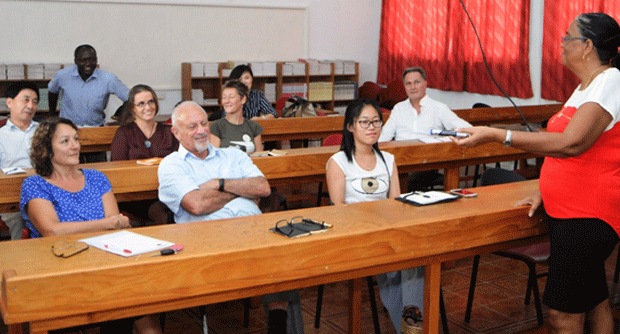 The University of Seychelles (UniSey) has introduced its first course in Creole language and culture as a tool for communication.

The launch of the new course took place on Thursday at the UniSey campus at Anse Royale.

The classes are being conducted by Eugenia Albert, a teacher from the Seychelles Institute of Teacher Education (Site). She has been teaching the Creole language for 38 years.

“The idea to introduce a Creole language and culture course is due to the fact that UniSey wanted to promote our Creole language, to make it become a part of their module. This course will benefit foreigners and even Seychellois people to better interact and understand our culture,” she said.

She added that many expatriate teachers have difficulty in interacting with the Seychellois students, simply by not being able to understand Creole.

“Many expatriate teachers have many problems communicating with the students. This course is to encourage them to better understand Creole. Foreigners are more interested in our language than Seychellois themselves. We need to understand that Creole is important. Many countries like Reunion Island and France are learning this wonderful language. The students will also be able to cook Creole food, and dance our traditional dance,” she added.

She concluded by saying that the course is still open for registration, and that in the near future they hope to create a Diploma course in Creole.

It is also interesting to note that the UniSey vice-chancellor, Professor Dennis Hardy and the British high commissioner, Caron Rohsler, form part of the group following the Creole language and culture course.

At the end of the 10-week session, all those taking part will receive a certificate from UniSey and they will move to level two of the course.

The course started on Tuesday and will run until June 9, 2016. The classes will are held on Tuesdays and Thursdays from 4.30pm at the Anse Royale and Mont Fleuri campus.

In Seychelles we have about 70,000 people who can speak Creole fluently. It is one of the official languages of the Seychelles, along with French and English. It is French-based Creole and has much in common with Mauritian Creole. Other names include Seselwa Creole French, Seselwa and Seselwa Kreol. Eighteen million other readers and writers around the world also use the language on occasions.