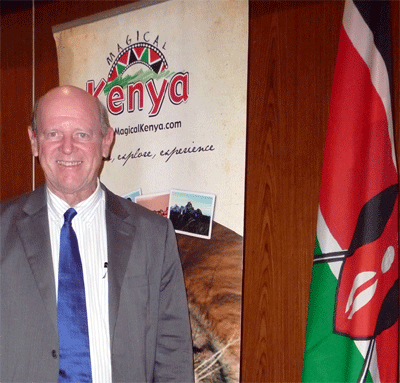 The Mombassa Forum organised by the UNWTO for East Africa Tourism Development from the 20 to the 22 August heard closing remarks by Taleb Rifai, the Secretary General of the UNWTO (United Nations World Tourism Organisation) and also by Minister Alain St.Ange, the Seychelles Minister responsible for Tourism and Culture.

At this Mombassa Tourism Forum the host Phyllis Kandie, Cabinet Secretary at the Ministry of Tourism of East African Affairs, Commerce and Tourism was joined by Taleb Rifai, Secretary General of the UNWTO, Dr Mohamed AbuZaid, the Minister of Antiquities & Wildlife of Sudan, Agnes Akiror Egunyu, the State Minister at the Ministry of Tourism, Wildlife and Antiquities of Uganda, Alain St.Ange, the Minister for Tourism and Culture of the Seychelles, Hon Ali Hassan Joho, the Governor for Mombassa County, Elsia Grandcourt, the Director for Africa at the UNWTO, Anita Mendiratta, the Special Advisor to the UNWTO Secretary General, Dr Ibrahim Mohamed, the Principal Secretary at Kenya’s State Department of Commerce and Tourism, Muriithi Ndegwa, the Managing Director at the Kenya Tourism Board amongst many others.

It was Elsia Grandcourt, the Director for Africa at the UNWTO who presented conclusions of the meeting with a summary of outcomes. This was done at the closing of the plenary session.

Closing Remarks were delivered by Minister Alain St.Ange, the Seychelles Minister responsible for Tourism and Culture before final remarks were made by Taleb Rifai, the Secretary General of the UNWTO. Minister St.Ange started by congratulating the UNWTO and Kenya for organising this Tourism Forum saying that this was a clear exercise of Africa working with Africa for the success of Tourism in Africa. The Seychelles Minister referred to an slide that was projected at the opening ceremony by Elsia Grandcourt that showed the cover of a book written and published over 40 years ago by the founding President of Ghana that was entitled “Africa must Unite” saying that the Mombassa meeting was showing that Africa was uniting today for its tourism industry, the industry that has become so important for the Continent and its islands. “It is our tourism industry that is employing our people from our respective countries. It is our tourism industry that is holding so many of our economies. It is our tourism industry that keeps the airlines of Africa alive. It is our tourism industry that is putting money in the pockets of our people” said Minister Alain St.Ange of the Seychelles. He went on to touch on the resolutions that Elsia Grandcourt had elaborated on and commended everyone for deciding on the formation of a body to look at tourism in East Africa and in the Indian Ocean Islands”. The final closing remarks were made by Mr Taleb Rifai, the Secretary General of the UNWTO. Mr Rifai complimented Kenya and the Cabinet Secretary Kandie for hosting the forum that is putting focus on Tourism in Africa. The Secretary General of the UNWTO spoke about the spirit of togetherness that is today more apparent than ever before and this he said would benefit the tourism industry of the East Africa Region as a whole.