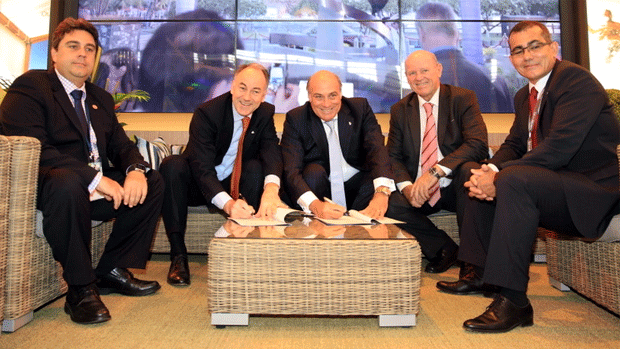 Costa Cruises and the Vanilla Islands have signed an agreement for closer cooperation. It was Norbert Stiekema, the Executive Vice President Sales & Marketing of Costa Cruises who joined Arnaud Martin, the Chairman of the Mauritius Tourism Promotional Authority (MTPA), Minister Alain St.Ange, the Seychelles Minister responsible for Tourism and Culture, Patrick Serveaux, the President of Ile Reunion Tourisme (IRT) and Pascal Viroleau, the CEO of the Vanilla islands at the Top Resa Tourism Trade Fair in Paris for the formalising of the document that was initially discussed in Seychelles during the 2015 Carnaval International de Victoria.

At the initial Discussion Xavier-Luc Duval, the Deputy Prime Minister of Mauritius, Didier Robert, the Regional President of La Reunion, Alain St.Ange, the Seychelles Minister of Tourism and Culture, Michel AHAMED, the Director of the Mayotte Tourism and representatives of the Madagascar Tourism had met with Mr Stiekema of Costa Cruises to open discussions that have now paved the way for the formal signature of a agreement for cooperation.

Costa Cruises will be doubling the number of passengers cruising the the Indian Ocean and also increase their cruise ship season. At the Paris Meeting it was also agree that for the arrival of the first Costa Cruise ship of this coming season, Ministers of the region would all join together in Mauritius to welcome the ship and they together board the ship together for a two days cruise to the Seychelles. The Tourism Ministers will be joined on board by the Costa Cruises Executives and Pascal Viroleau, the CEO of the Vanilla Islands where they will together work out a detailed plan of action for cooperation.

The Vanilla islands Representatives at the Top Resa Tourism Trade Fair in Paris said that increasing the number of Port Calls and passenger numbers was already a positive way forward, but more importantly it was the commitment to extend the length of stay by the Costa Cruises Ships in the Ports of the Vanilla Islands of the Indian Ocean.