Welcome to Seychelles: Luxembourg gets a taste of Seychelles’ island life 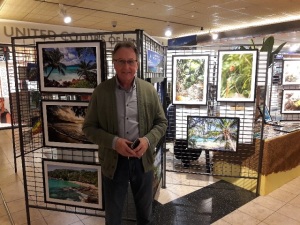 The Seychelles’ Creole life — including paintings of picturesque landscapes, traditional music, unique sculptures of endemic species and Creole cuisine — was at the centre of attraction in an exhibition in Luxembourg.

A group of creative and performing artists from Seychelles, an archipelago in the western Indian Ocean, spent one week last month promoting local arts and culture at the exhibition at Belle Etoile Mall in Luxembourg.

SNA met with two of the artists who explained that a lot of preparation went into their participation for the exhibition.

Mathiot said he took time off to work on some new paintings. “I had to meet with some artists especially those who do traditional music and songs such as the moutia, so that I could perform their songs.”

Isham Rath said, “We also bought some CDs with us and these were put on sale.”

The works of well known local artists Charles Dodo and Jude Ally were on display.

Mathiot told SNA that they had the help of Seychellois basketball player Jana Malbrook, who is currently living in France. 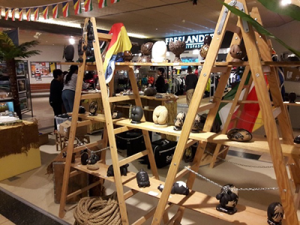 “She came to help us set up the stand and stayed for the whole week interacting with the visitors,” said Mathiot.

The colourful event was attended by hundreds of visitors including the Seychellois community living in Luxembourg.

“Visitors at the stall were given brochures about our islands. They could also buy our products — the paintings, sculptures and CD’s as well as the different culinary spices,” said Rath, the youngest member of the delegation who had the task of charming the visitors with island songs.

There was also a corner where visitors could also sit and enjoy local food and other delicacies.

Rath who is preparing to participate in the Jeux de la Francophonie to be held in Ivory Coast later in July says that the event happened in a timely manner — it presented him with the opportunity to get a taste of international exposure.

He said that this kind of exposure is a much needed boost for local artists who are thirsty for such opportunities, especially where there is the chance to promote themselves and market their products.