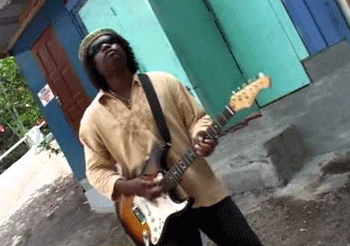 Confident and not afraid to speak his mind would be the way to describe singer and lead guitarist Philip Toussaint. His tone was assertive and his handshake firm. The man was clearly on a mission and after a few seconds of chit chat, he got right to the point.

“Basically I grew up with my grandma because mum was away at the time,” he began.
“My primary years were spent at the St John’s Bosco School where I took an immense interest in sports, namely football and athletics.”

Philip said music had not really crossed his mind at the time.

“When I moved to secondary, however – at the then Dominic Savio – I was slowly introduced to the music world. Friends would often come to school with guitars and my curiosity started to peak,” he said.

“I remember mum sending over a guitar for my brother who was not at all interested in music and who was a big fan of karate. Needless to say I tried it out and was hooked almost immediately.”

Philip joined Technical School and specialised in plumbing.
“However, I never actually practiced that. Music had become my sole passion and I could not imagine doing anything but that.”

The start of a career 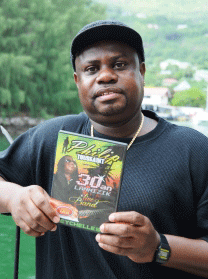 Soon after, Philip met the late Jocelyn Perreau, who at the time used to loan out instruments to music lovers at R15.
“I was always around and even as my friends lost interest in playing, my curiosity continued to grow and it was then that Mr Perreau took me under his wing and I played alongside him for a while.”

Soon after, Philip joined Mellow Moon, a group set up by musician Crescent Dinan at the time.

“I was always so restless and just wanted to keep playing, so even when bands broke up or came to disagreements I would just pick myself up and find another band to play with. The third I associated with was Saturn, which was made up of the Payette brothers and it was where I composed my first song – Laklerte,” he said beaming.

“The final group which I associated myself with was Moonlight. After that I dabbled in duets with Serge Camille for a little while before going solo where I have so far seen most success.”

Band life
As much as he enjoyed playing in bands, Philip said he would much rather fly solo.

“Band life can be messy at times. Don’t get me wrong, I enjoy playing in bands as much as the next musician, but when practice times clash and other members have commitments or issues with management arise, it isn’t very encouraging,” he said grimacing.
“I have to say the atmosphere is more fun in a close group though.”
Career
Unlike many musicians in Seychelles that have an 8 to 4 job and play music as a way to de-stress, Philip said his music is his fulltime job.

“I’m a musician and that’s all there is to it. It’s sad that many people do not grasp the fact that this is an actual job,” he said laughing.
“I’m not some starving artist. I have my own car and a house – and all this through, you guessed it, my music. I have never been employed by anyone else nor do I wish to be and just like all successful businessmen, I also had to start small to get to where I am now and to where I eventually want to be.”

“And now all this is on my new DVD which I have just released,” he said, holding up a copy of his latest creation.

30-an Lanmizik  is now being sold at all the usual music stores in Victoria as well as Ah-Yune at Baie St Anne Praslin and Jerry’s Boutique on La Digue.

“I’m also coming out with a new Christmas special due to be launched between November 10 and 15,” he said.

“This will include sega, reggae and seggae tracks which I know the public appreciate.”

Life as a solo artist
“It’s very exciting,” he smiled. “I’ve been to Mauritius, Austrailia, the United Kingdom, Singapore, France and Rodrigues to name a few, so travel opportunity is there. The only down side to it is it’s often hard to get a good band together to play your music, which is why I prefer to put all my tunes together myself and then bring it to Relation Studios for the final product.”

Advice to the youth
“First of all I want to express my disappointment at the decreasing number of young people who take up instrument playing. I think it’s sad and a great loss to music.

“Of course there are many making genuine progress in the area but unfortunately an  even bigger number of youths are simply taking other people’s beats and just adding words to it,” he said shaking his head.

“Originality is important. If you’re going to do something, give it your own signature. Take up playing an instrument if you have to and after that it gets really easy to make beautiful music. I look at the lack of drummers in Seychelles nowadays and it makes me worry. Who will play the drums after these existing ones have hung up their hats?” he added.

“I guess I’m just making an appeal for more people to come forward with real music. It’s a rewarding feat.”
Philip lives at La Retraite with his family.
Text by Rebecca Belle