In his book, ‘Forgotten Eden”, Thomas (1968:81) wrote that “…..there is no art [in Seychelles], apart from that expressed by “Creoles” in the carving of crude tortoiseshell ornaments or the weaving of baskets.”!

While it is true to say that the weaving of coco de mer leaves is said to have been taught by the Frenchman, Benezet, back in the 18th century even art, per se, as expressed on canvas, had existed for a long time in Seychelles.

One of the first artists was no other than Billy KING, a freed slave who expressed on canvas  his capture on the African continent and ”forced exile” to Seychelles.

It is true that most of the other veteran artists, however, were of European origin.

The Minister of Culture then said that an exhibition which featured the works of artists, painters and sculptors was a testimony to the development of art in Seychelles as a creative form of expression and gave a view of the state of contemporary art in Seychelles.

Contemporary Seychelles’ artists trained in universities the world over since the independence of the country in 1976, particularly, have been free to express themselves in a variety of styles.

Among those who have established themselves are well known ones such as Leon Radegonde and Egbert Marday.

Most of Leon’s early works included collages in acrylic and water colour.

Egbert’s works feature much of the traditional culture and environment expressed wonderfully in his sculptures.

The younger artists too have been expressing themselves in a variety of styles as they struggle to establish themselves.

On the occasion of the fourth Kreol Festival (26 to 31 October 1989) an exhibition of old Seychellois paintings was held at the National Archives then located at La Bastille.

Among the artists whose works were exposed were:

She was born in the 1900s. Apart from painting landscapes she was particularly interested in painting decorated curtains (‘Para vent’).

Shespent most of her childhood in Seychelles and died in Mauritius in the 1970s. She enjoyed painting landscapes….. fruits and flowers….

At 61 years old in 1989, she specialized in oil painting using a knife!

An accomplished musician playing the harp, the violin, the guitar….) and a gifted craftsperson enjoyed painting ‘la nature morte”, namely the the coco de mer and others…., historical and religious themes such as ‘Adam and Eve’ in the Garden of Eden (which many believed was in the Seychelles) with the coco de mer having the biggest seed in the world as the forbidden fruit. He was approaching his 100 years when he died in Austalia where he had settled. His son Raymond who lives in Praslin has inherited his father’s style!

Shearrived in Seychelles from Mauritius in the early 1900s and painting was her past time She died in 1978 when she was over 90 years old. 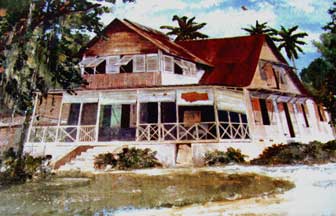 He was in Seychelles in 1969 and participated in an exhibition in the Carnegie Hall. One of his paintings which now belongs to the National Collection is that of an Anse La Mouche Plantation House which was later declared a monument.

He is one of the veteran artists who most Seychellois of his time knew. He was born of a French father and a Seychellois mother who arrived in Seychelles from the ‘l’Ecole des Beaux Arts” in Paris just before the Second World War.

Like Dubuisson in both Seychelles and Australia, many homes in Seychelles had his paintings which consisted mainly of aquarelle paintings of landscapes. He was also a very good cartoonist.

He died in France when he was around 60 years old.

As the architect for two (2) buildings which have been declared national monuments (‘La Bastille’ and ‘Lenstiti Kreol’ (or ‘Maison St Joseph’) and a cartoonist and musician, Lett was above all an artist passionate for his art. He was excellent in both water colour and oil painting. He died in the nineteen seventies.

He came to Seychelles in 1957 .Though little is known about him, his work includes the one “En zenn fiy pe fer son twalet”

She was born in 1920 and later moved to Spain. Art was her past time and lack of funds forced her to paint on wood. Like the rest, she enjoyed painting landscapes and still life.

Aged 79 in 1979, born Payet, she was Louis Payet’s cousin. Though she was more interested in music she left behind one of her rare paintings, a landscape.

Born in April 1908 painting was just one of his past times. Like his father and grandfather he was also a musician (piano and organ) for the Church in particular. He also liked to paint for the Church including statues. He had an exhibition at l’Alliance Francaise in 1959 where pots and vases were superbly painted or decorated following a technique he learned from Mr. Guy Devoud.

He was considered a ‘modern’ artist because of his techniques. Arriving from France in the 1950’s, he stayed on Praslin for some six years where he not only painted but was a tennis player, and was in politics as well!

2014-11-06
Georges
Previous: History of Seychelles
Next: Braided hairstyles for all occasions
Developers: Cyberwave