Breaking News
Home - Churches - Seychelles in the Arms of Mary

Seychelles in the Arms of Mary

Atop the front of the Immaculate Conception Cathedral, the Silver Statue of the Virgin Mary stands on the globe, beneath her feet a crushed serpent. In a posture of ethereal grace and sublime beauty, she gazes downwards with outstretched arms. For almost one hundred and forty-five years, the pious Catholics of Seychelles have looked up at this statue in veneration, and have felt solace and consolation in that gesture of motherly protection. 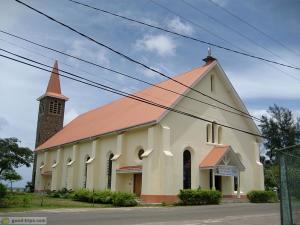 It is the oldest statue of the Virgin Mary in Seychelles. It was initially placed o top of a church that was built in 1864 in the same location where the present Cathedral now stands. At that time, Victoria was not yet diocese and father Ignace Galfione de Villafranca (1815-1881) who was the perfect Apostolic, nurtured the fledgling Catholic Community.
In the Catholic World, the Virgin Mary is glorified and celebrated more than any other saints, for obvious reasons of course, given that her prerogative is a supreme aspect of worship in Christendom.

Consequently n Seychelles, devout Catholics count there beads for The Madonna on eight Marian feast days: the purification 2nd Feb, the Annunciation on 25th March, The Assumption on 15th August, The Immaculate Heart of Mary on 22nd August, The Feast of Nativity of Mary on 8th September, Our Lady of Sorrows on 16th September, Our Lady of La Salette on 19th September and the Immaculate Conception on 8th December. In the Liturgical calendar, October is dedicated to Our Lady of The Rosary, and May is the month of Mary.

Two churches have been consecrated to her: Our Lady of the Assumption Church built in 1898, on La Digue and the ‘Notre Dame de Sept Douleurs’ church built in 1868 at Anse Boileau. And there are Marian shrines and grottoes al across Mahé , Praslin and La Digue, and on other island that are inhabited. 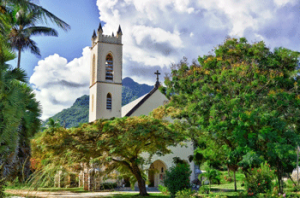 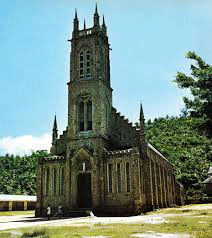 It is noteworth that Seychelles was consecrated to the immaculate Conception by father Leon des Avanchers (1825-1879) in 1854 which was the same year that Pope Piux IX (Giovanni Maria 1792-1878) proclaimed the dogma of the Immaculate Conception because according to a Catholic catechism, Mary was preserved by the grace of God from every stain of sin from her conception onwards. Yes, no wonder Seychelles is a Nation of Madonna Worshippers where the Hail Mary is recited more often than the Paternoster (the Lord’s Prayer). This particular prayer was officially introduced into breviary in 1568.

Since Mariolatry is a fundamental aspect of Catholic Theology of which more than half the population of Seychelles are adherents, Marian shrines and grottoes must surely constitute an enduring part of our religions heritage. Avowedly, like the first limestone chapels and churches that were built during the 1850’s when both the Angelican and catholic Missions had arrived to fix their respective crosses on our soil, the first shrines that were created then, have fallen into dilapidation and have been replaced, many in situ. 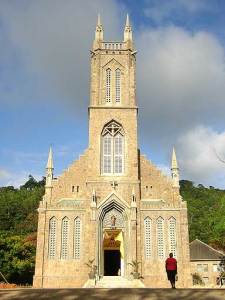 These ‘hallowed sites’ vary greatly from each other. Some are vaulted niches recessed in rocks decorated with springs of palms, some are blue-painted alcoves exquisitely carved in boulders with flower-filled jars on projecting shelves, and others are little oratories of masonry with elaborate mouldings and hemispherical ceilings. Obviously, all of them, contain a statuette or statue of the Virgin Mary hung with rosaries and offerings of candles, and also a few little coins placed discreetly among withered petals… the traditional expression of gratitude when invoking the Madonna’..ser… Intercession.

Indeed the Virgin Mary is prayed for redress against private and public wrongs and to bestow graces of all kinds. Meditation has been the most constant theme of her cult. She is after all, called, ‘Mediatrix of all graces’. This is embodied in the reverent petition that has been recited throughout the ages by our ancestors and is still being uttered daily somewhere as shrine in our archipelago: O la plus Claire étoiles Oui parut au travers des voiles, Dont la nuit du Péché nous offusquait les yeux. Reçois nos vœux et nos suffrages, Et nous sauvons de ces orages, Au port que tes bontés nous préparent aux cieux.

This Prayer ‘Ave Maris Stella’ which was brought to Seychelles by the sisters of St. Joseph de Cluny in 1860 was written in the 7th or 8th century. In it, Mary, the Queen of Heavens appears like the stars of the sea wrinkling benignly overhead to make life’s journey safe. The theology of the Virgin Mary’s intercession maintains very strictly that the Virgin (La Vierge) does not have the power to grant any blessing by herself but only intercedes with her son, who according to the Trinity doctrine as God is the only source of salvation. But the powers attributed to her throughout Christianity are considered sovereign: the son can refuse his mother nothing. So a prayer to Mary, made in a spirit of repentance and resolve, is wonder-working. But of course, men and women of Seychelles and elsewhere who pray to the Virgin are innocently unaware of the distinction between direct and indirect power! All prayers to Mary contain a plea for the Virgin’s help… in obtaining God’s mercy. 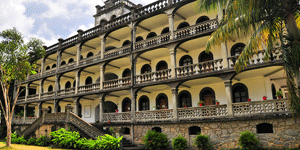 Many of those roadside Shrines and forest grottoes were built to commemorate a Marian event or occasion. The Anse Poules Bleues grotto for example, was consecrated on 6th May of 1950 by Father Lambert Noel (1910-1990) to celebrate the Dogma of the Assumption that was proclaimed by Pope Pius XII (Eugenio pacelli 1876-1958) in that same year. Many years earlier, in 1868, the Anse Boileau Parish of Notre Dame de Sept Douleurs had been established to commemorate the 10th anniversary of the Apparition of the Virgin Mary on 11th February 1858 in the Pyrenean mountain town of Lourdes to a 14 years old girl Bernadette Soubirous (1844-1879).

The feast of ‘Our Lady of Seven Sorrow’ whichfalls on the 16th of September was created in 1814 by Pope Benedict XIII in protest against Napoleon’s persecution of the church. Christianity was abolished in France in 1793 and it was restored on 1801. What are these seven sorrows? The prophecy of simeon, the fight into Egypt, the loss of Jesus in the Temple, the meeting with Jesus on the road to cavalry, the crucifixion, the deposition, and the entombment. 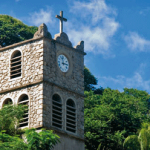 Mgr Ernest Joye (1880-1962) the fifth catholic bishop of Seychelles from 1934 to 1936 was known to have had a special fondness for the Virgin Mary. In 1925 when he was the Praslin priest of Anse Boileau he had constructed the Notre Dame de La Salette Chapel (it was rebuilt in 1993) which even today remains a site for the annual pilgrimage on September 19th. To note, La Salette is a place in the city of Grenoble in the South East of France where in 1846 the Virgin Mary appeared before two children.

One of the most joyous Marian feasts is the assumption on the 15th of August. This is when many inhabitants of Mahe and Praslin brave the tumultuous sea of the South West Monsoon to converge on La Digue to celebrate at the ‘Our Lady of the Assumption’ church that was built at the end of 1897. 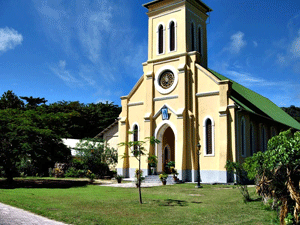 The year 1954 was decreed the year of Mary. Her Statue, which was given by a non-catholic Indian Merchant, was carried to every parish where it was kept for one month. That Marian year also saw the creation of many more shrines in many neighbourhoods in Seychelles.

The first pontiff to visit our Marian islands was John Paul II (Karol Wotjyla 1920-2005) who was considered to have been ‘Madonna’s Pope’. He bore the letter ‘M’, the initial of Mary, on his Episcopal emblem. He arrived in Seychelles on the 1st December 1986. Two years later, he proclaimed 1988 a Marian year, the second to be celebrated by the Catholic Church. He issued an encyclical expressly devoted to Mary, calling her mater Ecciesia (mother of the church).
Yes, oratories, shrines and grottoes have sprouted up all over Seychelles during these last 155 years, brought about it seems by the effervescence of Christianity and the frenzy of Marian Spirituality. There is a certain charm about a shrine. It evokes a feeling of profound bliss laced with melancholic yeaning because you know that you have come to supplicate, to beseech, to endeavor and to obtain succor from the Virgin Mary who will certainly intercede with her son Jesus, on your behalf. And it is only your faith in the efficiency of her intercession with Christ that can gladden you with hope well, so a devout Catholic or a fervid Marianist will tell you! You are drawn into a devotional exercise of contemplation, the likes of which you do not experience in a church. This is due to the fact that here at a shrine the ‘hyperdulia’ the special reverence reserve solely for the Madonna fills you with fervent trust and stirs you to the noblest emotions of love, pity and awe. 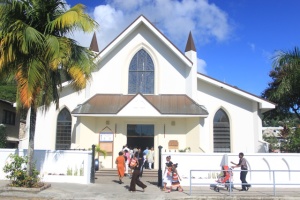 Mary is the perfect model of all .virtues. She is feminine perfection personified. And the sweet intimacy that you enjoy during a solitary worship at a shrine is itself the glorious affirmation of the shrine’s holiness…
So why is the Virgin’s cloak or mantle almost always blue? Well, as a sky goddess, Mary’s colour is blue. During the 11th and 12th century when the Byzantine capital was the centre of Christian art, blue became the Virgin’s colour, Medieval painters of the early 17th century insisted that she should wear a blue cloak. At that time, blue was an expensive pigment, obtainable only from crushed lapis Lazuli imported from Afghanistan, and after gold, it was the most fitting and fervent tribute to the Queen of Heaven.
Thus, the Queen of Angels’ the sovereign princess, The Immaculate Conception is always dressed in celestial or ultramarine blue.
What about the serpent that the Virgin treads underfoot?

The serpent is the principal Christian symbol of evil. This is established in the biblical story in which man loses eternal life (The fall). Being the penalty of eating the fruit of knowledge offered by the serpent (genesis 3)
Now, when you look up at the silver statue of Mary on the Immaculate Conception Cathedral, if you are catholic you will know that this remote majestic figure of the supreme model of virginity also symbolizes victory over evil.