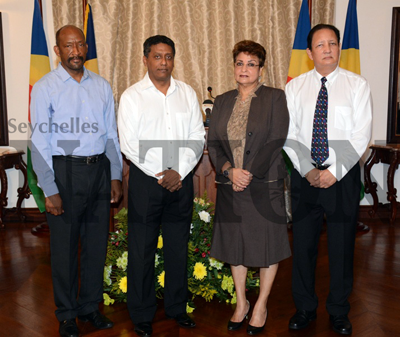 During the same ceremony, the Minister for Education Macsuzy Mondon became the first woman to occupy the position of designated minister while Dr Peter Larose took his oaths as a new minister.

Following the swearing in ceremony the three personalities were congratulated by President Faure and everyone present.

All three personalities gave their reactions to the press soon after. They all described their appearance before the Assembly as symbolic, a new way of doing things for Seychelles and an opportunity for people to know their journey better.

“There is a lot of work to be done, a lot of challenges to be faced but it is only through a good teamwork approach that we will be able to address these issues,” VP Meriton said.

With seven portfolios under his responsibility, VP Meriton stressed that this requires a strong administration where the best is expected from everyone in the team.

“I have confidence that we will work to ensure we translate the spirit of team work into concrete action to support the work of the government headed by President Danny Faure. We must always put our people at the centre of all development processes not only as beneficiaries but as full participants in the said processes for their own personal prosperity and growth as well as for that of their families and country,” VP Meriton said.

He added that it is the responsibility of the government – the president and his team – to continue to ease development with support from the private sector and the civil society platform bearing in mind that we cannot accomplish much alone but need to work in synergy with each other to reach these national objectives and make better use of resources that we have.

VP Meriton expressed heartfelt gratitude to everyone who has helped him in one way or another and contributed to his success – his parents and family, teachers and all his co-workers.

“The road has been a long one and now a new chapter is beginning for me and I wish to thank everyone,” VP Meriton said.

In an ever changing political landscape, VP Meriton said his work approach will also change for him to adapt but he will remain focused on ensuring Seychelles continues to prosper and its people take ownership of its growth.

VP Meriton said like everyone he is not perfect and may have not been able to help everyone who has sought his help but considering this as a new challenge he said he will focus on staying connected to and listening to the people.

Prior to being appointed VP, Mr Meriton was first appointed minister in January 2004 where he was responsible of the Ministry of Social Affairs and Employment and subsequently several other portfolios and was appointed designated minister in July 2010.

‘I will continue to work with the same honesty, seriousness and diligence’ – Designated Minister Mondon

“I will continue to work with the same honesty, same seriousness and diligence. If I am where I am today it is because of hard work and nothing can be achieved without hard work,” Minister Mondon said.

Commenting on the new process whereby nominated ministers go before the assembly for approval, Minister Mondon welcomed the new way of doing things.

“I welcomed the opportunity to be questioned by assembly members before assuming the position of designated minister. It was an opportunity for people to know me better, learn more about my work and the progression of my career. I was able to talk about the long road I took which has led me to where I am today.

It was also an opportunity to clarify certain issues and perception people have about me and the ministry I headed,” she said.

As designated minister, Mrs Mondon is well aware that she will have new responsibilities and more work but she said it is with humility that she assumes her new position and will continue to work hard and be the person she has always been – simple and hardworking – bearing in mind her humble beginnings.

“I am a survivor in a way and the best part of my career I spent in education with the children, teachers and head teachers,” she said.

Expressing her pride and joy on being the first woman designated minister, Mrs Mondon said in spite of her new responsibilities and workload she hopes to have the opportunity to do more to advance the cause of women in our society.

She expressed the hope that her appointment will be a source of encouragement for other women to continue to aspire for leadership positions and roles.

Ms Mondon was first appointed minister in August 2006 when she was given the portfolio of health and subsequently the ministry of employment and human resource development which later merged with education. Since 2010 she has been heading the Ministry of Education.

Minister Peter Larose who has now joined the Cabinet of Ministers has said being the professional that he is, he is ready to assume his new responsibilities as a minister to bring his expertise and experience for the development of his country and people.

“I have to come in with a vision, with a work plan and a monitoring mechanism,” he said.

“I will need a dedicated team of professionals and I believe in Seychellois because I believe we are very smart, resilient and competitive. I am a people person but also a serious person keen on achieving results,” Minister Larose said.

Commenting on the approval procedure before the National Assembly, Minister Larose said this is for him a procedure which he has been going through throughout his position at the World Bank.

“I am used to these types of interactions when I have to answer for and defend the cause of the different countries I represent at the World Bank,” he said.

Minister Larose was before his nomination, the chairman of the Group Eleven (G11+ 2) of Executive Directors of the World Bank Group. He holds a PhD in UK Commercial Banking and has had a prominent career in finance whereby he has worked in the Ministry of Finance and the Central Bank of Seychelles. In 2008, Dr Larose became the Advisor to the Executive Director of the Africa Group 1 Constituency with the World Bank, and has since occupied senior posts with this organisation.

Minister Larose’s mandate with the international institution comes to term on Monday and he will be leaving for Washington at the weekend to finalise his departure from the world body.