History of the Seychelles NATION newspaper 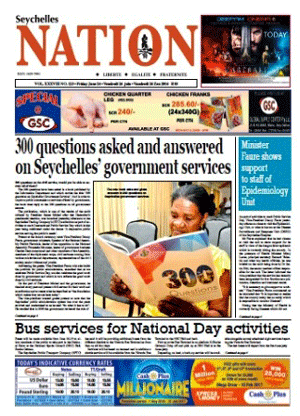 The history of the now Seychelles Nation newspaper dates back to the 1920s. Between 1926 and 1929, the government started publishing a daily leaflet called Reuters’ Telegrams and Advertisers.

In 1942, the name changed to Government Bulletin and 19 years later (in 1961) it was called Seychelles Bulletin. The newspaper kept this name until the day of independence – June 29, 1976 – when it became Nation. It was on January 4, 1984 that it became Seychelles NATION.

From four pages when it was called Seychelles Bulletin, Nation increased to six pages in 1976. From an evening edition, Seychelles NATION changed to a morning one and the first morning edition of Seychelles NATION came out on November 19, 1979. It also became thicker with eight pages from Monday to Friday and 12 pages on Saturdays.

In 1982, the weekday issue increased to 10 pages and the weekend edition to 16 pages. In 1990, four more pages were added to the weekend newspaper to become 20 pages.

Seychelles NATION moved to its existing location on March 12, 1994 and acquired state-of-the-art technology.

Seychelles NATION also has a weekend edition called Seychelles Weekend NATION and is published on Saturdays. It has 24 pages.

The first colour issue of the Seychelles Weekend NATION was printed on December 30, 1995.

With the mission of informing and correctly educating the public, the newspaper has since then continued to develop and improve on the quality and variety of information it gives its readers and has over the years become very popular.

and the Seychelles NATION unveiled its prowess in visual storytelling and new designs by bringing out a new-look Seychelles NATION weekday newspaper which debuted on Monday November 5, 2012 with the usual 20 pages – four of those in colour.

The coloured pages were 1, 2, 19 and 20 during weekdays. While the cover page carried the lead story of the day, there were coloured adverts of different sizes on pages 2, 19 and 20. 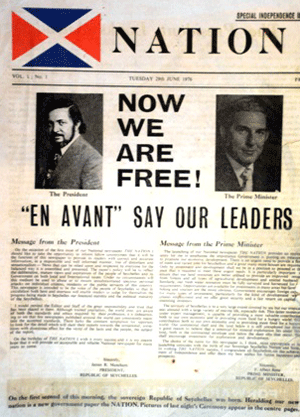 The oldest daily newspaper in Seychelles which is celebrating its 40th anniversary on June 29, 2016, the Seychelles NATION newspaper has gained in height, by 5.3 centimetres. It has become thicker with four additional pages — increasing from a minimum of 20 to a minimum of 24 pages during weekdays, the same number of pages contained in the Seychelles Weekend NATION published on Saturdays.

While the cover page carries the lead story of the day, there are coloured adverts of different sizes on pages 2, 23 and 24. Pages 3 and 4 (in colour) as well as pages 5 and 6 (in black and white) contain national news.

The other two coloured pages – 21 and 22 – are dedicated to sports. International news is on page 20. 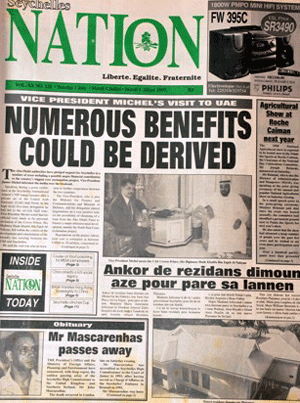 economic trends happening in Seychelles. These specialised sections are on pages 7 and 8.

As a result of the additional pages and more colour, the newspaper cost went up by R2 to R10.

The editorial team want the readers to feel more engaged in the new newspaper as they welcome their contributions in the form of letters, opinions, poems, short stories and interviews.

The aim of the editorial team is to continuously upgrade the newspaper by injecting more style and colour into its products, thus giving its readers value for money.

As a result of the revamping the team is making a real investment in the Seychelles NATION newspaper, and putting a major focus on reinvigorating the value of print media.

The newspaper is written in the three national languages — English, French and Creole. 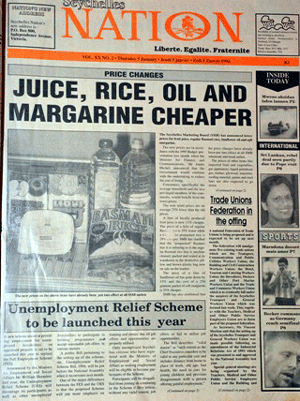 The Seychelles NATION newspaper is published by the National Information Services Agency (Nisa), a corporate body aiming for financial autonomy.

It was on March 23, 2010 that the National Assembly approved legislation for the setting up of the information agency which provides information services in an efficient, objective, impartial and cost-effective manner to the public and state institutions.

The publishing arm of Nisa, Seychelles NATION is an established information outlet for the government, national institutions, the private sector and public in general.

The newspaper’s website, which is updated every morning, can be accessed at www.nation.sc.

The Seychelles NATION newspaper was printed by Printec Press Holdings until May 2015 when NISA opened its state-of-the-art press facilities at the Bois de Rose on the night of May 17, 2015.

The new printing facilities have been operating under the business name ‘NISA Press’.

Although the facilities are primarily for the printing of the Seychelles NATION newspaper, NISA Press has a commercial orientation and has been doing other printing jobs.

By printing its own newspaper since May 2015, Nisa has been making substantial savings in printing costs. This is because previously the printing of the newspaper was outsourced and costs had been spiralling.

In total, Nisa spent some R25 million to procure equipment, refurbish the building, train personnel and pay for technical assistance from overseas.

Funding of the project consisted of a R20 million loan from Nouvobanq and accumulated reserves of the agency since its setting up in May 2010.

The NISA Press is being manned by a full force of young Seychellois and only one foreigner. All Seychellois technicians have followed training in Reunion and Mauritius as well as locally.

2016-06-28
Georges
Previous: Winners of national theme painting and photo competition rewarded
Next: Cyberwave Computing 2000 – Over 200 graduate in IT courses