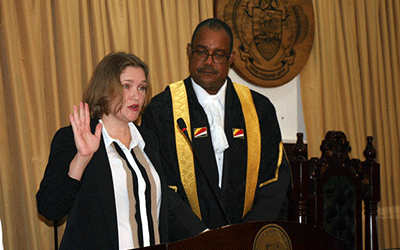 Francesca Monnaie took the oath of allegiance before Speaker Patrick Herminie on Tuesday, filling the only seat held by the opposition. (Rassin Vannier, Seychelles News Agency)

Francesca Monnaie became the new leader of the opposition in the Seychelles’ National Assembly on Tuesday after David Pierre submitted his resignation a day earlier.

Pierre’s resignation from parliament followed his recent resignation as leader of the political party he formed in 2011, the Popular Democratic Movement, PDM. Monnaie, formerly the party’s secretary general, is now also the interim leader of PDM.

Monnaie took the oath of allegiance before Speaker Patrick Herminie on Tuesday, filling the only seat held by the opposition.

Article 84 (1) of the Seychelles’ Constitution stipulates that a leader of the opposition shall be elected by the National Assembly from among its members.

It’s the first time since the establishment of the third republic, when the country adopted its current constitution in 1993, that a leader of the opposition in the assembly resigned from the office.

Speaker Herminie also confirmed on Tuesday that Monnaie is the first woman to hold the office.

Monnaie, 29, said she felt “honoured and proud” to take up her new positions.

A candidate of PDM in the last parliamentary poll in 2011 where she obtained 154 votes in Bel Ombre, a district in north Mahé, the main Seychelles island, Monnaie will hold office at least until the next legislative elections.

Parliamentary elections in Seychelles are held every five years. The next one is scheduled before September 2016.

“PDM’s agenda is to work in a democratic manner. At the moment we are still discussing as an executive committee on how to move forward in the next election,” she added.

Monnaie was welcomed by the leader of government business Marie-Antoinette Rose, who said that her joining the assembly “increases the percentage of women in the assembly.”

PDM was the only opposition party that contested the September 2011 parliamentary polls against the ruling Parti Lepep after other parties boycotted the elections.

The party failed to win any directly elected members in the elections and obtained one seat in the assembly in December 2011 after winning a court challenge on the allocation of proportional seats.

The seat was allocated based on its 3,828 vote, which amounted to 10.89 percent of valid votes cast in the election.

The party’s former leader, Pierre, said his first reason for stepping down follows PDM’s performance in the last presidential elections held in December. He said that he had to complete some unfinished work in the assembly and also as a member of some affiliated bodies before announcing his decision.

“I resigned as the party leader to give someone else the opportunity to bring the party forward and this reflection follows the results of the last elections,” said Pierre adding that he was disappointed with the results because he has worked to “in the interest of the people and Seychelles.”

Pierre won 400 valid votes or 0.66 percent of the December ballot, standing against five other candidates.

“Due to such results I am obliged based on democracy to step down and allow somebody else to take over,” added Pierre.

Questioned about his next move Pierre said: “I have made it clear that I will explore all of my options that life has to offer and based on the options I will make the best decision.”

Before setting up his own party in 2011, Pierre was formerly the deputy secretary-general and proportionately elected member of the National Assembly for another opposition party, the Seychelles National Party, SNP.