Our treasure at the bottom of the sea… 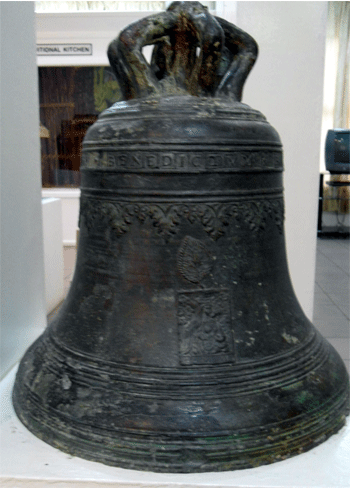 Imagine that you are diving out there, somewhere among our outer islands. You descend deeper into an abyss, perhaps about 20 fathoms where the water gets colder and visibility is nebulously dark. As you get closer to the seabed, your torchlight illuminates a cluster of coral-encrusted objects of various sizes. You move closer and you touch them. You try to lift one. It is firmly embedded in position. You try another. It won’t budge. Through you face mask you squint at these objects. As you hang there in the frigid stillness of the sea, you feel that familiar rush of adrenaline- because you know what you are looking at….The contents of a shipwreck from over a hundred years. Yes, imagine the thrill of such a discovery! To think that there are those who have actually experienced such an exciting sensation….

In April of 1971, two divers were looking for shells off the coast at La Digue Island when they found 11 bronze naval guns of different sizes among the corals at a depth of about 60 feet. Imagine that! It took eight men three days to lift the guns and other huge pieces of iron which probably were used as ballast into a 40-feet boat. Those precious artifacts were carried over to Mahe. Some of those cannons are now at the National Library Building. One can be seen at the entrance gate of the National Heritage Institute at La Bastille, Union Vale. It was not conclusively established from which boat or frigate the guns could have come from.

It is known that a French Frigate, the Fl che was sunk by a British boat, Victor in Mahé harbor in September of 1801. She was later raised from the seabed and repaired. Her armament consisted of 8-pounders, most of which were in the hold in order to make room for a 40- man escort. The only notable naval battle occurred in August of that same year between the British Sybille and the French La chiffonne. Although the latter suffered considerable damage, she did not sink and did not lose any of her guns. Anyway, not anywhere near La Digue. 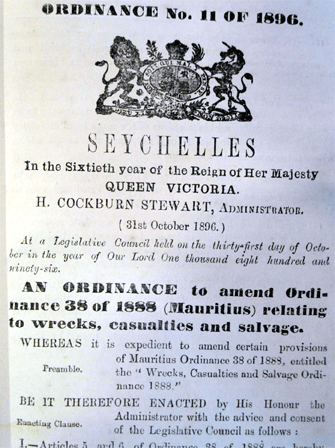 What is indisputably clear is that our one million Sq Km of Ocean must be a treasure trove of artifacts. Indeed, quite a few interesting finds have proven this fact. Concealed beneath our ocean are the remnants or contents of not less than a hundred shipwrecks that occurred between 1550 and 1970.

From Arab Dhows in the mid-16th century to a Royal Navy oil tanker in the 20th century, there must be tons of objects lying out there in our part of Davy Jones locker. It is overwhelmingly intriguing to know that centuries of history are presently hidden in the abysmal depths of our sea which is also gradually wearing them away.

Between the late 15th to 18th centuries, many European nations developed into Empires of merchants. The trade in spice, opium, tea and slaves between Imperial powers meant that thousands of boats navigated the oceans of the world. In their search for these highly- prized commodities, many of these boats must have strayed to our part of the Indian Ocean where they encountered some great mishaps and sank.

The oldest shipwreck to be located is the L’heureux, a 400 ton French bark that sank south of Providence Island on the night of 5th September 1769 after having discovered the island on the 30th of August. The 37 men aboard managed to reach Providence in a canoe where they stayed for two months, naming the island so because of its providential nearness to their great misfortune. The L’heureux which had left Mauritius bound for Bengal, India was reported to have been carrying 250,000 gold Peso coins. 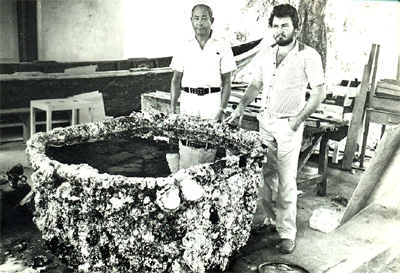 Mr. Macgaw and Mr. Gardette with the huge pot from the “Asp”.

In 1994, Undersea Salvage (Pty) Ltd, a Seychelles registered company specializing in marine archeological explorations carried out recovery operations on the wreck of L’Heureux. Various valuable objects were recovered, including a copper bell with intricate designs. That same year, in March, the South African Historical Shipwreck Society recovered many artifacts from the St. Abbs which wrecked on the reefs of Juan de Nova, one of the Farquhar islands on 14th June 1860. The objects that included inkpots, earthenware jars and bottles are on exhibition at the National History museum.

On the morning of 17th December of 1828, an American whaler named Asp, sank off Madge Rocks (also known as Blanchisseuse) not far from St Anne Island. She was a 345 ton three-masted vessel that had voyaged from Nantucket Island before encountering her fate.

In 1985, Michel Gardette, a Seychellois Diving enthusiast who had a fascination for shipwrecks succeeded, with the assistance of the Seychelles Navy in removing one of the huge pots that was used aboard the Asp to produce whale oil. With a circumference of six meters and a height of one meter, it proved quite a Herculean task for the Praslinois diver’s perseverance. It took nine hours and four unsuccessful attempts to dislodge the coral- encrusted pot some 25 meters below, on the sea bed. So imagine lifting a massive iron pot from the ocean where it has spent 157 years. 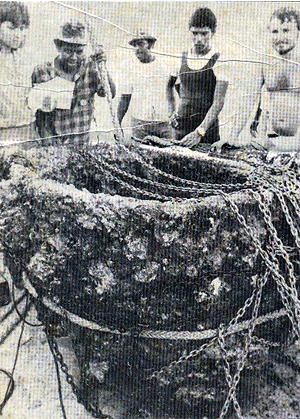 The huge pot recovered from the “Asp”.

These are only a few recorded recovery operations that have been carried out on some of our shipwrecks. It is legitimate to assume that there must have been more which have never been reported. Alas, during these last fifty years or so, countless diving expeditions must have resulted in the removal of artifacts and relics from many wrecks and sold in antiquarian shops in Europe.

Today, we have become, albeit belatedly, aware that the wrecks that lie at the benthos of our one million sq m of Ocean constitute our underwater cultural heritage. Their centennial presence beneath our sea is, let’s say, simply awesome. This is something tragically fascinating about shipwrecks. Some divers will tell you that they a melancholy attraction. Others may find the site of a shipwreck distinctively disturbing, perhaps even frightening. It is after all, the supreme testimony of the horrifying discontinuity to an ill-fated voyage. It evokes the moment of the tragedy with an almost macabre vividness. One hears the sound of crushing wood and the terror-stricken cries of drowning passengers. Such heart-wrenching scenes must have taken place more than a few times in our midst during the 19th century.

……..and we know that usually artifacts and relics that are found in old shipwrecks are sold for lucrative prices in the antiquarian shops of Europe. How much that masterpiece of a bell from L’Heureux would have fetched if it had been clandestinely carried away so many years ago, because there is no definite law that could have prevented this from happening. Therefore, it can never be ascertained how much and what sort of artifacts have already been removed from our shipwrecks. We can not even speculate how much is left of our precious underwater cultural heritage. In the absence of legislation, shipwrecks in our part of the Indian Ocean are vulnerable to intrusion by divers from anywhere in the world….and they have been. 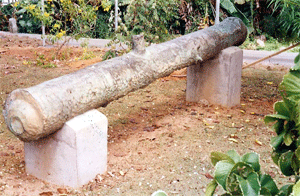 One of the eleven canons that were found off the coast of La Digue in 1971.

The first law pertaining to shipwrecks that was ever enforced in Seychelles was the Wrecks, Casualties and Salvage Ordinance 1888. This law was amended in 1890, 1896. But this law does not apply to the illicit traffic in marine archeological objects, and it does not proscribe the plunder and pillage of shipwrecks sites. We must take into account that any legislation that is created to protect our underwater cultural heritage should disallow nations whose ships have sunk in our territorial waters from claiming rightful possession of wrecks…which does not mean that they won’t do so, especially if some valuable artifacts like the 250,000 gold coins that are said to have been on L’Heureuse are ever recovered! In other words, if our underwater cultural heritage are their historical possessions, how do we resolve the issue? Anyhow, it is impossible to protect all our shipwreck sites from being plundered, and moreover, we cannot ascertain how many of those sites we actually have and where they are precisely located. We know that we must have more than a few shipwrecks in our waters which we have to protect because they encapsulate certain periods in the maritime history of the Indian Ocean. Our claim to these old wrecks are obviously not in terms of national patrimony (evidently, they are not) like our old Colonial edifices and such like. We have an ‘historical ownership’ over these wrecks and this is what ignites our concern for their protection. They are things, which by great misfortune have ended up in our frontyard, so it is altogether sensible that we worry about their presence and refer to them as our ‘underwater cultural heritage’. Few will disagree with the way they should be protected and appreciated_ although this, I must admit, will be to the disadvantage of most of us. That is, because most of us are not divers and are not remotely considering taking up diving, not even scuba diving –so?

… So imagine one day you decide to visit the History Museum. You walk around the place, the various objects on display stimulating your curiosity, your fascination. You come to a large and high rectangular glass box, and you are gazing at a huge object that evidently has been subjected to the ravages of corrosion for many decades. You try to figure out what exactly it is, until you notice the label at the back of the glass box that tells you that what you are seeing is a victrola phonograph recovered from the wreck of a British ship that sank in our waters in the late 19th century.

Well, it is part of our underwater cultural heritage.

2015-08-31
Georges
Previous: Two Praslinois musicians to be honoured in the Seychelles’ Musicians Wall of Fame
Next: THE MISSION RUINS