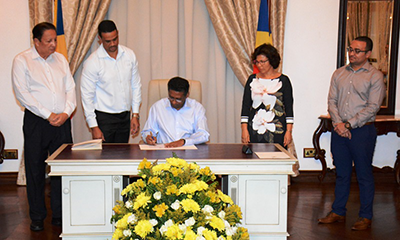 President Danny Faure has officially signed the Appropriation Act to start the process to release the national budget for the year.

This follows the approval on Wednesday by the National Assembly of a supplementary appropriation which authorises reallocation of budget for the STB ,the Tourism ministry as well as other entities which had requested additional financial assistance.

It is the first time that a president of the republic gives his assent to the Appropriation Act publicly in the presence of witnesses and the press.

Also present at State House was designated Minister Macsuzy Mondon among other guests.

It is to be recalled that the Appropriation Bill 2017 was published as a supplement of the Official Gazette on December 5 last year and was presented  to the National Assembly  for approval on December 9 by the Minister for Finance, Trade and Economic Planning Dr Peter Larose.

In line with President Faure’s ethos of good governance, transparency and accountability, for the first time in the history of our young democracy, principal secretaries and chief executives were called to Parliament to be questioned on their respective expenditures. The debates that were broadcast live captured public interest both locally and abroad as many remained glued to their radios or television sets while the social media buzzed with opinions, views and comments on the discussions.

After lengthy deliberations, the Appropriation Bill 2017 was passed by the National Assembly on February 24 this year.

However, as required by law, the Appropriation Act 2017 has to receive the assent of the President before coming into effect.

Once the President has given his assent to the Act under Section 2 of the same Act, the finance minister will have the authority to carry out the expenditure once the Act has been gazetted.

Speaking to the press soon after the signing, PS Payet said now the next step is the Act goes to the Attorney General’s office while at the same time the finance minister will send an official written authorisation to the PS of finance to enable him to release all the funds appropriately to all ministries, departments and other entities which receive funds from the budget. As the process started immediately, PS Payet said by Monday all would have been finalised and it would be business as usual for all budget dependent  entities.

“Now there should be no excuse relating to the budget for any ministry, department or other entity not to pay for their expenses, service providers and to start new projects,” PS Payet added.

The Attorney General for his part pointed out that the signing “shows the interaction between the powers of government”.

“The National Assembly deliberates, debates and recommends the law  to the President to sign,” Mr Govinden said.

He stressed that the President must sign all the laws of the country before they become effective.

“But  given the importance, the magnitude  of public interest and concerns in the Appropriation Bill which was debated publicly and live, the President has today rightly exercised his power to assent publicly showing that he is in favour of the Bill and the interplay between the different powers of government,” Mr Govinden remarked.