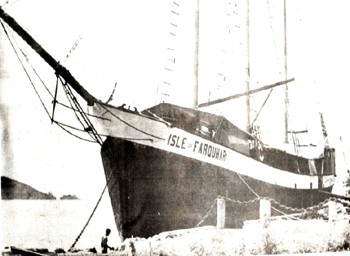 Thirty-eight years ago, if you were boarding the Isle of Farquhar, you would have been told ‘bon appetit’ instead of ‘bon voyage’,… because our old beloved three master schooner moored at Les Mamelles had been turned into a floating restaurant with a capacity for 32 people.

The schooner was built in Holland in 1906 and she was named ‘Zeemeeuw’. In 1912, she was sold to a Finnish company and renamed ‘Killiky.’ She was again sold to a Swedish Line and was again renamed ‘Linnia’. In 1942, she was sold to a Mauritian Fishing Company and as ‘La Perle’ she was the mother ship of a fishing fleet. In 1963, Moulinie and Company of Seychelles bought the schooner and renamed her ‘Isle of Farquhar.’ During the next decade, she carried cargo and passengers to and from the outlying islands. Unfortunately, she is now a monument of rusted iron at the basketball court of Les Mamelles.