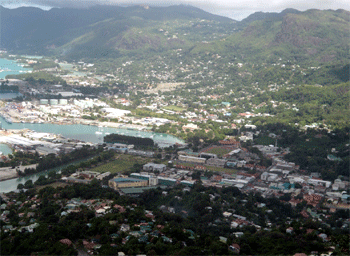 View of Victoria from Signal Hill in 2012.

There is a mountain in Seychelles that played a pivotal role in maritime communications. This is Signal Hill, located in the northern part of Mahé over looking the harbour of Victoria. It is from this 1,341 feet elevation covering a radius of 30 miles, that for almost a century, vessels were signalled by an elaborate method of flags that were hoisted up a flagstaff. The signals were observed through binoculars by the watchman at the Port Victoria office below who would inform the shipping master accordingly so that necessary preparations for the arrival of ships could be made.

It was a few years after a lighthouse had been erected in Victoria harbour (1872) that this most ingenious signalling device was initiated. That was the time when steam ships of the Messageries Maritimes provided the colony of the Seychelles with the only link with the outside world. Moreover, the country relied on these ships to bring cargo and to carry the country’s agricultural produce to the overseas export markets. 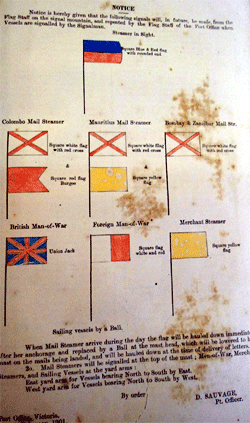 Notice appearing in Seychelles Gazette of 1901.

On 14th January of 1901, a new code of signals was adopted and a mountain signal man was officially appointed. He was Jacob Gerry and his annual salary was Rs.360. he resided with his family in a dwelling house constructed of timber. In 1930, an additional flagstaff was erected at Signal Hill to provide for the signalling of the locally registered vessels by means of distinguishing flags. A stone house was also built for the signalman.

Ruins of the Signalman’s House taken in early 2011.

In 1961, the mountain signalman was Ernest Gendron whose annual salary was Rs.2, 412. The last signalman was Basil Gendron, Ernest’s 17 year old son who occupied the post in the late 1960’s.his salary was Rs.2, 700 annually. The Signal Hill station closed down in 1973 with the opening of the New Port. By then, modern radio communications at the shipping office had rendered the signalling flagstaff obsolete.

Today, Signal Hill (Mapaviyon as it was called in Creole) is a National Monument site and is much appreciated by hikers who come up to appreciate the magnificent panoramic view of the modern Victoria.