The games we used to play 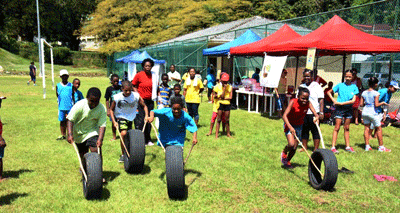 For Monuments Day this year, Unesco promoted the theme ‘Our sports Heritage’. On behalf of the National Heritage Research Section, TONY MATHIOT takes a nostalgic look at some of the popular games that children in Seychelles played some decades ago.

They were delightfully recreational, pleasurably sportive and so full of fun, those games we used to play. You would certainly remember if you were among the children of yesteryear.

Back in the 1960s, athletic sports and games were held at four main venues which had been specifically built for that purpose. These are:

1. Gordon Square (1885) which was originally used as a cricket ground by British Civil Servants of the late 19th century.

2. The Seychelles College playing field  (1947) where, for over three decades, secondary students competed in the annual inter-house athletic competitions and won trophies for their respective houses.

3. The Victoria Gymnasium (1968) where the first netball games were played in Seychelles and;

4. The Happy Youth Club Building (1963) where the local Herculeses discovered the beauty of being brawny, besides the good Fellowship that darts and dominoes could create.

So while the grown-ups engaged in their sports, the children enjoyed their pleasurable activities. There must have been a dozen games back then. Some were played strictly by girls, such as Lesel (hopscotch) or Sot lakord (skipping) while all the rest were played by boys and girls together. No, it was not uncommon for girls to take part in games of kannet (marbles) and prove that they were skilled shootists, to the great frustration of the boastful boys! Even for a long afternoon game of Gard ek Voler (policeman and thieves) the willing involvement of the girls was a blessing – because in some neighbourhoods, the number of boys was less in proportion to the number of girls. But then again, the girls would join the boys only if they were not in the mood to play their own games. You see, gender was not a factor for the enjoyment of a game. Let’s go back to some of the games we used to play:

A player would miss by losing balance, stepping on a line or dropping the tile on a line or in a wrong square. A player who missed lost a turn and had to wait until the others had played their turn. The ‘others’ could be three or four other girls. The first one to have moved through all the squares was the winner. The hopscotch court was sometimes shaped like a snail – then it was called Lesel kourpa (snail hopscotch). 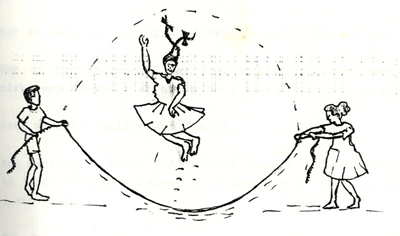 Another game that was popular with the girls was Sot lakord (Skipping). The skipping rope was invariably a long vine stripped of its leaves – any solid thick vine, such as the pumpkin vine was good. The skipping game had a few variations depending on how many players were available. Two girls swung the rope while a girl skipped between them. The four different speeds were salt, mustard, vinegar and chilli (moderate, mild, fast and faster!) There was a changing of speed, the crossing of hands and skipping on one foot; sometimes there would be two or three girls skipping at the same time. They performed duties such as turning around, turning round another skipper and picking up a stone. The skipping games were often played as ‘oracles’ – the girls swinging the rope would sing out the oracles:

– What will you be when you grow up?

Teacher, nurse, doctor, nun etc (Until the skipper tripped and by doing so, revealed her profession!) 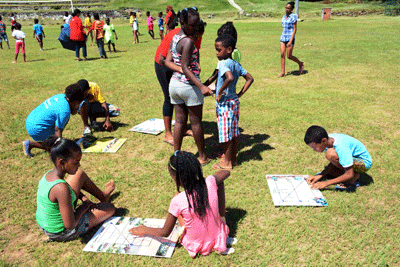 How many children will you have?

One, two, three, four, five, etc (until the skipper tripped)

And if she felt that she was getting tired, the skipper could actually call on another girl outside to take her place, with the rope still being swung, of course. Usually, by the time a skipping game was over, after a couple of hours or so, the rope-vine would be practically worn-out and frayed. Therefore, every new game required another vine. With a skipping game every Saturday and every Sunday afternoon, and practically every afternoon during the school holidays, girls remained energetic and inexhaustible.

And while the girls skipped or hopped, the boys played marbles. Every boy had his pocketful of marbles which included a Biy (a shooter). It was the desire of every player to have, after the game was over, more marbles in his pocket than he came to play with. At 10 or 11 years old, there was nothing more depressing than losing one’s marbles. The enjoyment and progress of the game depended on the strict adherence to the rules. A ring is drawn on the ground. At the periphery of the ring, a line is drawn on the ground that corresponds to the diameter of the ring. Opposite that line, a few meters away, a longer horizontal line is drawn. This was called the Bit. After every player has placed an agreed number of marbles in the ring, they stand on the short line from which each one in turn tosses his shooter at the bit. The player whose shooter lands closer to the bit is the first to start shooting at the marbles in the ring. Basically, the object of the game is to see which player shooting in turn from outside the ring can knock the most marbles out of the ring. If a player’s shooter is hit by another player’s shooter, he is ‘killed’ and has to return all the marbles that he has removed back to the ring – and he is out of the game. The player shoots again from the point where his shooter stops. Having a good accuracy in aim would almost guarantee that you balye (remove) nearly all the marbles the ring. The marble game has a jargon of its own. Remember pran lerim (to find best angle from which to shoot), mazet (inaccurate in aim). Marbles were played at home, on a ‘neutral’ tract of land in the neighbourhood as well as in school yards. Among all our traditional games, marbles are among the very few to have lasted up to the early 2000s.

Do you recall that bayon di bi – deor! ritual each time a game of kouk (hide and seek) was played? Definitely not! We must have gone through it hundreds of times, considering that we played kouk from the age of eight until 11 or 12. To decide who should be the seeker, one of us (could be boy, could be girl) would wet a finger of a hand. Then, a player would recite the ‘incantation’ while striking out the players who would go hiding. The last one to remain would be the seeker. The seeker shut his eyes facing a tree or the wall of a house and counted to 100 while the others hid. The seeker then went to look out for them and when he found (debiste) a player, he raced him back to base. If the seeker got there first, the other player was caught. If the hiders got back to base before the seeker, they went out to hide again. 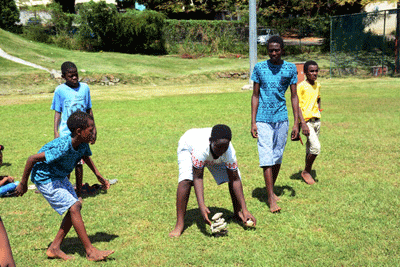 Gard ek Voler (policemen and thieves) was usually played only once or twice at any one time. Lots was drawn to decide who were to be the ‘thieves’ or the players unanimously agreed to take turns at being thieves or policemen. The ‘policemen’ allowed the ‘thieves’ one or two minutes to escape after which they started to hunt them down. The game, as those of you who have played it know so well, could be of extended continuance and extended time – because more often the ‘thieves’ who wanted to be as far away from the ‘policemen’ as possible and thus minimise the likelihood of their arrest, ran and hid beyond the boundaries of the neighborhood where the game started. They disbanded and each one went his (or her) own way. Thus, it was not uncommon for a game of ‘gard ek voler’ to start at a friend’s house at La Rosière and for the gard (policemen) to catch up with the voler (thieves) somewhere up among the prin de frans (coco plums) in the hills of Greenwhich! It was that kind of game. It required good physical constitution. It was fun, wasn’t it?

There were games that only children who lived on the coast and near a marsh could enjoy. That was kartye maron (Rafting). One can only imagine the thrill of tying some bamboo stems or pieces of raffia together and sailing out on a marsh on a scorching Saturday afternoon. For those children, the marsh was their playground. If the marshes of Anse Forbans and Grand Police could speak, they would tell us about the boisterous and jovial commotions that they have witnessed. The kids would fix sails on their little contraptions and organised regattas for their own childish amusement.

…and remember how a privilege it was to own a Serk (a bicycle hoop). We got hours of fun trundling it along with a stick pressed against the furrow. If we didn’t have one – not every neighbourhood had hoops – it was sheer excitement to be lent one. Those days, manicured lawns did not exist and it seemed that we had miles and miles of pathway to drive our hoops. 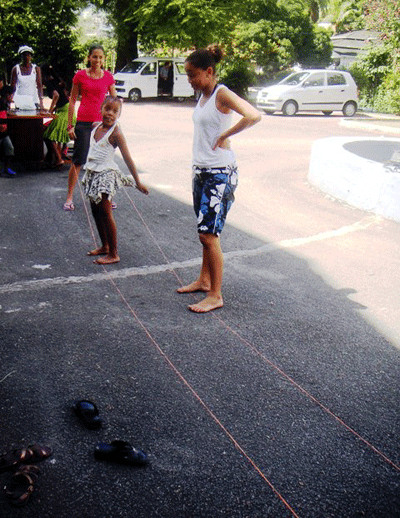 Our games were outdoors, in the shade of those huge mango and breadfruit trees from whose thick and solid branches we were wont to suspend our swings – yet another thrilling game of ours! We burnt our skin and we skinned our knees many a time while playing. We played barefoot so it did happen, though seldom, that we stubbed a toe or sprained an ankle.

On rainy days, we played Ludo or Snakes and Ladders. The girls played konos (five stones).Now, that required a level of dexterity!  Five small pebbles were used.  The game required that a player achieved a fixed set of throws.  For instance, one way was to toss one pebble into the air and before it fell, to gather up one or more pebbles from the floor. The stones might have been caught on the back of the hand, knocked on the floor or against the mouth, or picked up in twos or threes.

Well, like it is often said, times have changed and those games we played are part of the happy memories we have of our childhood. They promoted friendship and harmony, an intimacy of comradeship that has lasted to adulthood.

Nowadays, our children enjoy Nintendo games, computer games, play stations and tablets – most often in the confinement of their rooms… Yes, times have changed.