THE HINDU TEMPLE OF SEYCHELLES 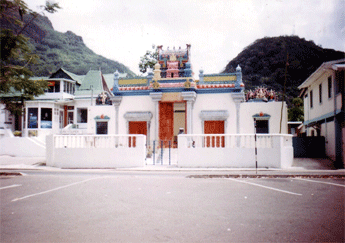 THE HINDU TEMPLE AFTER ITS INAUGURATION IN 1992

Created almost 240 years after the first Indians arrived in Seychelles, the Vinayagar Temple is more than just a spiritual sanctuary.  It’s a veritable artistic wonder.  TONY MATHIOT (Marie-Cécile Sullivan) shares his (her) fascination….

It was a momentous occasion for the Hindu Community of Seychelles.  It was an event in the history of Seychelles.  It was the Kumbabishekam or the ‘re-consecration’ of the 16 year old Navasakthi temple in Victoria.  And it was not in the kindest of weather that it had to take place – because 9:30a.m on Sunday 20th January 2008 was dull with blustery showers.  Nevertheless, it had been forecasted by Hindu Seers to be the most auspicious moment for the blessing.  The guest of honour was Angini Veria chettiar, the Vice President of Mauritius, which is a predominantly Hindu country.  The Vice President of the Seychelles was also present, along with foreign and local dignitaries.

As Sundramurthi Thambrian, the Hindu religious guru began the proceedings accompanied by Brahmins from Tamil Nadu, the weather gradually began to take a favourable turn, and the temple was soon soaked in glorious sunshine.  It looked like a flower whose freshness and beauty was attributable to its continuous bloom.  And thus, on that particular Sunday, that little corner of Victoria at Quincy Street was fragrant with the scent of incense.  It was vibrant and colourfully awash as Hindu devotes in blazing garments and saris scattered petals accompanied by the chanting of mantras and the sonorous sounds of nathaswarams (clarinets) and thavils (drums).  150 litres of holy water in 35 jars were poured over the temple – with devotes and Seychellois onlookers alike frantically vying to catch the precious trickles in their cupped hands to wash their faces with.  Inaugurated on Thursday 6th of May 1992, the temple was the fruit of hope, perseverance and benevolence.

And it came some 138 years after the inhabitants of Seychelles got their first Catholic and Anglican Churches (in 1854) – despite the fact that Indians have been in Seychelles for over a century.  Indeed, historical records confirm that among the first group of people who settled on St. Anne Island in 1770, there were five Indians from Pondicherry, a city in madras state on the Bay of Bengal which was then a French outpost.

The Seychelles Hindu Kovil Sangam was formed in 1984, three years after the Sunni Muslims living in Seychelles had opened their mosque.  There was a consensus among the Indian Community that it was about time that they had their own place of Worship too.

An International appeal was made for funds, and interestingly enough the first foreign donation was from a ten year old girl from Sri-Lanka who posted $1 in an envelope but sadly forgot to write her name and address!  Pecuniary generosity came from Malaysia, South Africa, Switzerland and even Papa New Guinea.  Vegetarian food fairs were organized.  The first one ever in Seychelles took place on Saturday the 2nd May 1988.  Since the creole palate possesses a natural propensity for spicy Indian Cuisine, it was not surprising that the Seychellois public relished the sambar with rice, paplet ghashi (pomfret in coconut gravy) kathal (jackfruit) curry and vadas with such uninhibited degustation that another vegetation food fair was organized the following year on 1st of October-when those who thought that chilli cakes and samoosas were all that our Indian residents could offer, discovered the savorous and tangy delights of moong dal halwa, kuifi and choorma ladu.

In October of 1989, an expert in Hindu architecture from Tamil Nadu, Ganapathi Sthapathi arrived and recommend that a Vinayagar temple be built.  Vinayagar is another name for Ganesha who is worshipped as the remover of obstacles.  His statues, showing an enormously fat human figure with an elephant’s head can be seen all over India.

The Foundation Stone was layed on the morning of Sunday 6th May 1990 and the Construction of the building was entrusted to Vijay Construction at a cost of Rs.950,000.  A team of Sthapathis worked from August 1991 to March 1992 to create the various sculptures on the then 7 metre high building.

After its consecration two months later, the Hindu temple became the cynosure of Market Street and evoked fascination as an anacorism.  Indeed, The Thaipoosam Kavadi Festival was organized for the first time in Seychelles on Saturday 6th February 1993.  At that time the priest of the temple, the Brahmin, was Sri Selvaganesha Sivachariar.  Hinduism, a religion without a set dogma or centralizing authority is a complex and moving reality.  It is a religion of salvation.  The deliverance from the cycle of rebirths, no matter whether it is called nirvana or moksha and no matter how it is imagined is the supreme objective all Indians.  The gods or deva of Hinduism are countless.  They are merely the proliferating manifestations of a multiform holiness and bear no relation to the divine personages for whom the title Lord is reserved.

At the Vinayagar Temple, Hindus come to pray to various gods.  Brahma (The creator) Shiva (The destroyer), Vishnu (The preserver), muruga and others.

Many Hindu devotees of Seychelles participate in one of the largest gatherings of humanity on earth which is known as Ardh Kumbn mela (Half pitcher Festival), a 45 day religious event which takes place every six years at Sangam in the city of Allahabad, 250 miles from New Delhi.  This festival which draws millions of Hindu pilgrims commemorates a mythical battle between gods and demons over a pitcher of nectar of immortality.  Devotees believe that by bathing in the chilly waters of the Ganges, liberates them from a continuous cycle of birth and reincarnation and guarantees immortality.

According to Hindu Scriptures, after every twelve years, the deities installed in the temple loose their power so re-consecration or kumbabishekam is necessary and essential to reinstate their divine power.

For is first duodenary ‘re-consecration’ the Hindu Temple of Victoria has been enlarged and raised to 16 metres in height.  For over 3 years it underwent a metamorphosis that constitutes a radical refinement of its former self.  The entire building is now a breathtaking panoply of intricate carvings of characters from Hindu mythology.  Like an ever blooming flower, it stands in colourful sublimity, a prayer hall yes, but also a symbol of noble achievement and a magnificent tribute to the memory of all those Indians who at the turn of the 20th century arrived from Gujarat to come and live here in market street, creating various business enterprises and commercial establishments which played a fundamental role in the Social History of the islands.

Seychelles has been enriched with a marvel of infinite patience, elaboration and exuberant Hindu imagination.

And yes in twelve year’s time, there will be another kumbabishekam…