Breaking News
Home - History of Seychelles - The Lavalas of 1862

One hundred and fifty years ago, a natural catastrophe happened in our islands. It was a calamity of an unprecedented nature. Tony Mathiot tells us the story of that harrowing event… 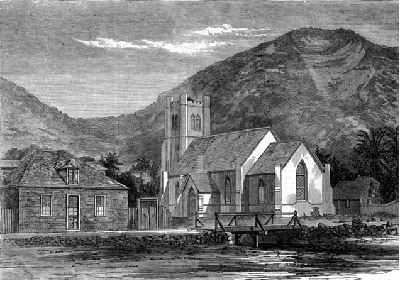 …And now, after so many days of continuous torrential rains, the forested mountains above the small town are in a state of saturation. The storm rages on, like it has done during the night. As turbulent streams of water pour down the hillsides, carving out gullies and ravines on their way towards the town, winds whip and lash fiercely at the canopy of forest, tearing away large branches of huge towering , centenarian timber trees.   The absorption of water at the extremities of their roots has rendered the surrounding soil soft, almost like sponge cakes. Among the trees, on the ridges and slopes are granite boulders of various shapes and sizes, embedded in the ground where they have been for so many thousand of years. Now, the flowing water rushes around them, washing away the securing earth from their sides and underneath. The overflow from tributaries has turned into violent rivulets, winding down the slopes on their twisting course among the trees. It is a morning of parsimonious daylight, and for a brief moment the wrath of the winds also bears the subtle angelic tendrils of a hymn from a children’s choir, from far down below in the small town of Victoria.

Suddenly, a cliff face begins to crumble, disintegrating as it hurtles down the mountain slope and dissolving into a great gurgling river of mud and debris as it blends with the torrent of water rushing down wards. All across the steep wooded slope, old giant trees are tottering over as they are uprooted by the violent movement of shifting earth which also causes many giant boulders of various shapes to roll down, dislodging other boulders on their way. Somewhere up high, part of a mountain ridge is also crumbling down, tons of earth, rock debris and trees are carried down by their own weight.

And this landslide is heading towards the town of Victoria below, where all the rivers have already burst their banks and the streets are raging floods of mud and swirling waters, where dozens and dozens of houses made of lattes have been blown away or have been displaced by the violent winds of the night’s hurricane where many families await their fate in petrified horror.

…And so there was deluge, destruction and death. It was an unprecedented natural catastrophe for the archipelago of the Seychelles which was governed by the British as a dependent of Mauritius. The devastation that it caused and the suffering that it inflicted on the population of around, 7,000 inhabitants have no doubt made the lavalas the most dreadful event in the history of Seychelles. At that time, coconut oil was the most lucrative agricultural activity in the islands, so coconut estates were established on many hundreds of acres of land. Since the civil commissioner George Thompson Wade had died of dysentery on the 25th September of 1861 at 41 years old, and the arrival of his successor Swinburn Ward was due in late October, the district magistrate Eugene Dupuy (1810-1875) was appointed acting civil commissioner. Indeed, he had to contend with multifarious difficulties in the aftermath of the disaster, from a waterlogged town, to the threat of famine, the consequences of that lavalas, were appallingly horrible.

On Sunday morning, the bodies of two nuns and eight children were recovered from the ruins of the convent. The nuns had arrived at Mahé on the 4th of February the previous year from Reunion, to establish the congregation of the Sisters of St. Joseph of Cluny. A catholic priest, Father Jeremie Giantomaso (1820-1841) who was the Apostolic Prefect, was rescued after having been buried under mud for almost five hours. The rivers that flow through Victoria towards the Ocean were choked with tree trunks and rocks, therefore, provoking the overflow like Morrisson, the surveyor general wrote in his report to the colonial secretary, F.Bedingfeld” to spread like flood over the lower part of the town and passing over the chaussé of Victoria street filled in the sea frontage to a depth of from one to two feet, to a distance, on an average of 400 feet from wharf wall”. 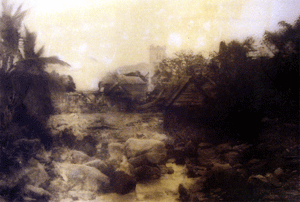 The government buildings which had resisted the impact of the raging flood were buried several feet in mud, three bridges were completely destroyed and the few timber dwellings that had escaped destruction had been tossed into various positions far from their original sites. The streams of the town were so clogged with mud and rocks that the network of bridles paths was obliterated by the sludgy overflow. Royal Street itself had changed into a sinuous river.

By late Sunday afternoon, scores of families who had lost their homes were snuggled together inside the Anglican church of St.Paul, with the bodies of the dead children. On Monday the 13th, a mother and her three children were buried in the same grave in the church yard because the level of mud and giant boulders had made access to the Victoria cemetery virtually impossible. Anyhow, the island’s oldest cemetery was an appalling mess, with more than a few limestone tombs ruined or reduced to rubble, that were scattered about in detached remnants of their former artistic structures. A most gruesome sight in the vast bleakness of the day. Some fresh graves were washed away by the torrents of water so that afterwards there was no discernible trace of the burial sites in order for tombs and headstones to be erected.

For the interment of the bodies in the church yard, the corpses, tied up in mattresses had to be sunk by means of weight as the graves were half full of water. The two nuns were buried in the foundation of the cathedral of Immaculate Conception that was then being constructed.

On Wednesday the 15th, a “Comité de Secours” was formed by some inhabitants to consider the best means of bringing relief to the victims of the Lavalas. Dr. James Henry Brooks, (1831-1920), a government medical advisor established a temporary hospital where those suffering from fractures, lacerations and confusions were attended to. He made an emergency request to the medical officer of Mauritius for an urgent supply of medicine and articles.

At noon, everyday the bell of the Anglican Church rang to call those who were in need of food. Three hundred habitants came daily to receive meal. The stock of rice in the government store was badly damaged and in late October, when he was eventually informed of the dreadful calamity that Mahé had experienced, the colonial secretary of Mauritius ordered an immediate shipment of 1,800 bags of rice. Sergeant R. Brunton who diligently conducted a survey to assess and evaluate the scope of damages that Mahé had suffered, estimated that there were 60 bags of rice and 6 to 7 thousand tons of maize available in the shops, just enough to feed the population for at least, the last two weeks of October.

By Friday the 17th, the number of people who had perished in the lavalas had reached sixty-seven: 19 men, 27 women and 21 missing. On the 18th, the head and one leg of a child were found in the mud at the St. Joseph convent and the following day the body of a thirteen year old girl was removed from the mud near Government House and another woman died from wounds received during the hurricane. “The mud is beginning to dry up, but the town is in a pitiable condition.” Sergeant Brunton’s report said on the 19th of October.

Indeed, the mud in Royal Street was forming into a compact mass now that the October sun had returned with the usual scorching heat. Labourers had to cut a canal into it to enable the St. Louis River to flow through. Dead poultry and pigs were in a petrifying state, and the stench combined with that of so many tons of rotten vegetable matter created a miasma of such abhorrence that Dr. Brooks advised the resident of Victoria to move out and go to the remote areas. Hundred of inhabitants heeded the doctor’s warning and hastened to other districts in fear of the prospect of disease.

Landslides occurred at other places on the east coast of Mahé, particularly at Petit Paris and Anse Aux Pins, but no loss of lives were reported there. The hurricane caused such considerable damage to coconut plantations at Anse Royale and Baie Lazare which prompted Sergeant Brunton to observe that “It will take from two to four years to repair the damage meanwhile, the manufacture and export of oil will be much diminished.”

On St. Anne, Cerf, Anonyme and La Digue, many properties were destroyed. On Fregate Island, where a rum distillery was established 30 acres of sugarcane plantation were destroyed, and one large house and all outhouses were unroofed. However, Praslin and Curieuse were exempted from the hurricane’s wrath. In fact, the inhabitants on these two islands were not even aware that a lavalas had occurred at Victoria, until a couple of weeks after the calamity when the dreadful news eventually reached their shores!

For many days, Indian labourers from Mauritius and prisoners, with the assistance of liberated Africans who had started to arrive at Mahé the previous year also helped with the work. When civil commissioner Swinburn Ward arrived on the 27th October, he found the Dependency in great distress and suffering but fortunately the arrival of three boats from Mauritius precluded the possibility of famine, Dart, Surprize and Romp brought an abundance of food provisions to the stricken inhabitants. The final inventory of houses etc destroyed, people and animals killed during the lavalas on Mahe was alarming. 210 houses, 108 outhouses, 295 huts, 22 roads and 11 bridges were destroyed. 25 men, 27 women and 23 children were killed. 12 oxen, 25 sheep and 12 asses were killed. Many books, paintings and historical documents of inestimable value were destroyed.

On the 11th November, Bishop Vincent William Rhyan (1816-1888) the first Bishop of Mauritius arrived at Mahé, having been informed of the lavalas by HMS Orestes’ chaplain who had been given a letter by Adolphe Vaudin civil chaplain of Seychelles, to convey the bad tidings to his Lordship. Bishop Rhyan had first visited Seychelles in 1856 to see the site where the church of St. Paul was to be built in Victoria. The second visit was in 1859 when he had consecrated the church on the 15th May. He was profoundly moved by the distressful state of the island. He visited many places on Mahé and heard the heart-wrenching accounts of many families who had lost a loved one. He was greatly sympathetic when he saw the tower of St. Paul’s church stocked with bags of rice. He was especially affected when he learned that the grave of Commissioner Wade had been swept away in the raging flood. The Bishop had fond memories of the late commissioner’s hospitality and companionship during his last visit to Seychelles. On his last evening on Mahé, the many scenes of destruction and utter ruins that he had seen lured him into such a state of dithyrambic contemplation that he was inclined to immortalize the Lavalas in few Latin verses “… Nec tempestatum vis tetigisse valet”

2015-07-18
Georges
Previous: Jude Ally, an icon of the creative Industry, returns to Seychelles as a Gold Medallist of the Jeux de la Francophonie
Next: First public-private tourism strategy meeting defines