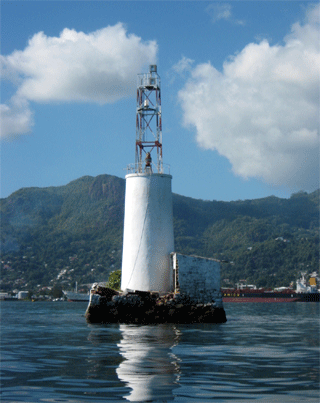 The Victoria lighthouse is located about 3km northeast of the Victoria waterfront, at the entrance to the Victoria harbour. Situated at the precise position of 04˚36.84S/055˚28.24E, the lighthouse structure measures 35 feet high and consist of a white masonry tower topped by a skeletal tower of aluminium steel. The light is a white flash that shows every 6.7 second with a range of 12 miles.

This is an indispensible navigational aid to ships arriving at Mahé during the night. It was declared a National Monument in 2011. It was in 1872 that Port Victoria got its first lighthouse. The lighthouse was replaced in 1877, and then a new one was built in 1909 at a cost of Rs.3, 000. It consisted of a masonry structure with a wooden skeletal tower that exhibited a flashing light of 300 candle power.

It was Commissioner Charles Spencer Salmon (1832-1896) who initiated the construction of the second Victoria Lighthouse in 1877 when with the increase of maritime traffic in the Indian Ocean, Victoria was becoming an important seaport town where ships could be provided with water and coal. At that time, the main vessels arriving at Mahé were ships of the Messageries Maritime. This was erected on the N.W. edge of the southern reef at the entrance to Port Victoria, from which was exhibited a fixed red light at an elevation of 37 feet which was visible in clear weather at a distance of 9 nautical miles. The light was catoptric and an unbroken arc of 140˚ of illumination between the bearing of S.1˚E, and N.39˚W. A wall, 3 feet high and 18 inches wide was built around the lighthouse platform on which premises for the keeper were constructed.

In 1909, the lighthouse keeper of Victoria was Polixene Chiffone whose annual salary was Rs. 360. His job was to ensure that the lightning apparatus was kept in good condition and the entire lighthouse structure regularly renovated. The lighthouse operated on acetylene gas cylinder which was renewed about every six months. As from 1926, the cylinders were sent to Zanzibar to be recharged.

2015-08-20
Georges
Previous: The Lighthouse of Denis Island
Next: The Wreck of Ennerdale