Breaking News
Home - History of Seychelles - The Wreck of Ennerdale

The Wreck of Ennerdale 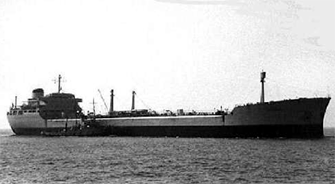 The maritime history of Seychelles contains many chapters that tell the tragic accounts of ship wrecks in this part of the Indian Ocean. From a Portuguese clipper that wrecked off North Island in 1784 to a Norwegian bark named “Norden” that sank near providence in 1907, these harrowing stories make us aware of those many wreckages of ships that lie hidden in the murky depths of the ocean and of those so many lives that were taken by an instance of cruel fate.

One particular disaster that still lingers vividly in the memory of the Seychelles is the wreck of Ennerdale in 1970. On Monday the 1st June of 1970, at 8.am, the Royal Fleet Auxiliary tanker, carrying 20, 000 tons of fuel oil left Port Victoria, after spending two weeks in the harbor. The 47, 000 ton vessel was 710 feet long and 90 feet wide. The crew consisted of 18 British officers and 33 Seychellois men. They were on their way to refuel the Frigate H.M.S Andromeda, which was expected to arrive at Mahé on Friday. Almost half an hour later, the tanker which was sailing at a considerable cruising speed struck an uncharted pinnacle of granite near Mamelles islet, eight miles to the north-east of Victoria. The impact of the blow had ripped open steel plates in her hull and in a couple of hours with sea water pouring in through the gaping holes, she was listing heavily to starboard. Captain George Bray gave orders to abandoned ship. The crew got into the tankers life boats and went back to Port Victoria. 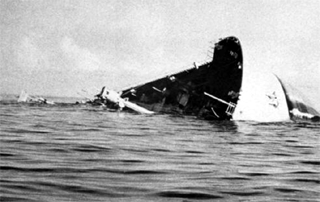 By the next morning, Ennerdale was lying on her starboard side with her port brow protruding slightly above the surface and the most dreadful consequence that one would expect from a sinking tanker was happening…. She was leaking oil. The oil slick which extended from the wreck in a south-easterly direction to Recife Island, 16 miles away. The governor, Sir Bruce Greatbatch (1917-1988) accompanied by Port Officer Captain J. A. Savage and Captain George Bray went to visit the wreck in the inter island ferry boat Lady Esme to see the extent of the pollution.

It must have certainly been a terrible tormenting sight to sea such a huge and sleek modern tanker horribly kaput, having hardly attained her first decade in the R.F.A. service, Like seeing a mortally wounded lion lying on the floor of the jungle.

The Ennerdale was launched on the 31st August of 1962 by Kieler Howaldtswerke and was originally named MV.Naess Scotsman for Anglo -Norness shipping Co. Ltd. The vessel which was classed as a Mobile Bulk Tanker was charter by the Admiralty on the 13th July of 1967. 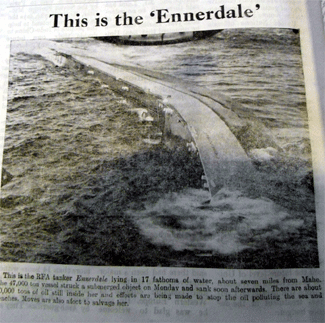 Salvaging operations began almost immediately. Various options were considered in a bid to avert an ecological disaster. Initially, it was decided that pumping the oil out of the tanker would be the ideal solution. However, when it was apparent that the vents that were discharging the oil were underwater and could not be reached because of heavy swell, the plan was abandoned. By the 5th of June, the oil slick had spread out to reach Silhouette, some 40 miles to the west of the wreck. It was then decided that the best and wisest course of action was to rupture her oil fuel tanks so as to release her cargo while the South East monsoon would help to keep the oil away from the shores of Mahé.

An airborne method of delivering explosives was devised. This entailed placing 3 mortar bombs in a pallet which was lowered into position on the wreck from a helicopter. The cordtex fuse was then ignited by the crew inside the helicopter. The explosives demolished the tanker’s port wing tank releasing 12 000 tons of oil. To reach the starboard side tanks, another ingenious plan was devised. To place the demolition charges in the correct position, divers secured a 45 foot wire pennant to the top of the wreck and using a Gemini Dinghy, joined it to a similar wire that was lowered from the helicopter. As the dinghy raced clear, the helicopter crew lit the cordtex ruse and released the bomb tray which, on its ninety foot pennant dropped down alongside the vents on the lower tanks. The difficult and hazardous operation were directed by Lieutenant Commander Brian Harold Lithgow Braidwood , the Far East clearance Diving Officer of the Royal Navy, and Lieutenant Max Kenworthy, the senior pilot from 847 Naval Air Squadron. On the 19th January of 1971, both men were awarded respectively with the Queen’s commendation for Brave conduct and for valuable service in the air.

Now, the Ennerdale has become a fovourite diving location, 17 fathoms under the sea. During the last three decades of so, hundred of divers have gone into the black interior of the tanker, where fishes have made their home.