Breaking News
Home - History of Seychelles - Wood beneath the waters: Wrecks in Seychelles

Wood beneath the waters: Wrecks in Seychelles 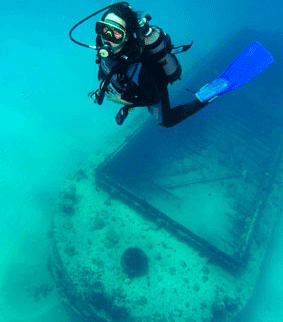 The Ennerdale wreck is now a popular site for divers

One thing is for sure: navigating the uncharted coral reefs and shallow waters of the Seychelles Islands with only rudimentary equipment, and often with bulky and cumbersome craft, was truly a recipe for disaster.

Besides the dhows, dugouts and other craft of antiquity which must have plied these waters long before man arrived to settle in any numbers, who knows which other peoples may have visited? There is a growing body of evidence that the massive fleet launched by Chinese Emperor Zhu Di on 8th March 1421 under the command of the brilliant eunuch Admiral Zheng, may have travelled down much of Africa’s East Coast during the course of their exploration of what is now the Indian Ocean, and beyond.  Was one, or more, of his ships lost during the voyage?  It is, surely, more than possible.  As I write, an expedition is underway in the Middle East to prove that the ancient Phoenicians were possibly the first to explore the east coast of Africa, even before the Arabs.

Over the centuries, many ships have been lost on the fatally beautiful reefs of Seychelles’ islands but records only go back to the late eighteenth century, shortly after the islands became inhabited.  One of the first is that of a Portuguese clipper on its way from Traquebar to Trinquemaly which went aground on North Island, followed by the wreck of the frigate Heureuse on Providence in 1763 and that of the French vessel Éclair on Coëtivy in 1787.

One of the most fascinating stories surrounds the fate of the Portuguese frigate ‘Le Dom Royal’ which, ‘laden with plunder and slaves’ went aground on the remote atoll of Astove in 1760.  The captain and crew immediately took to the sea in a long boat, abandoning the slaves (but probably not the plunder) who then settled into a ‘liberated’ lifestyle until they were ‘rescued’ by a visiting ship around 1796, but only after a fierce fight.

Among the various sloops, privateers, whalers and brigs that ran aground from Bird island in the extreme north of the archipelago to Aldabra in the extreme south west during the nineteenth century was the ‘St Abbs’.  She struck the reef at Farquhar in 1885 in a storm which was so violent that the crew, deciding they were sure to die, got drunk while their vessel ground itself to pieces on the reef. The survivors then spent some time onshore in the company of several casks of beer and port which had ‘escaped’ from the ship’s stores and which presumably rendered their brief stay on the island very pleasant.

Sadly, all too often, traces of these wrecks are now either non-existent or very faint but, on the other hand, one may also argue that the sites of wrecks, particularly on the outer islands, have seen very few divers and who knows what relics from the past extensive searches may still unearth to surprise us?

Of the wrecks that are still visible, undoubtedly the most spectacular is that of the Ennerdale, a 47,000-ton Royal Fleet auxiliary tanker that ran aground 8 miles northeast of Victoria in June 1970, occasioning an elaborate operation to then secure her safe sinking in relatively shallow water where she is now a popular site for divers and for a thriving population of giant groupers.

Other popular wrecks for the diving community are those of the Twin Barges just off Bel Ombre at depths of 15 and 22 metres respectively and the Dredger wreck at Danzil, scuttled in 26 metres of water after use in the reclamation of Mahé’s International Airport.

More recent wrecks are those of the 27-metre Aldebaraan which now lies in 40 metres of water off north Mahé, not far from L’Ilot, and the 69-ton barge, Lavann, which may be visited in 15 metres of water near Takamaka Rock in south Mahé.

Since those early times when men first set foot in ships and began to explore the oceans, Seychelles has enjoyed more than its fair share of visitors, many of whose voyages remain obscured by the mists of time.  We can now only imagine what shipwrecks may have occurred upon this necklace of sparking islands which are, at once, so phenomenally beautiful but, also, so very deadly to shipping, particularly in the days before the invention of sophisticated navigational aids.  However…as treasure-hunting techniques continue to improve, we may yet discover exciting vestiges of lost vessels in the azure waters around Seychelles.