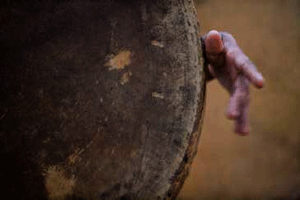 “Bat sa tanbour la, tanbourye, sa pa lapo ou manman ki lo la. Sa lapo zannimo ki lo la!” “Beat this drum, drummer, it’s not your mother’s skin, its animal skin”. It sounds like an insult, but it is part of Seychellois culture. If you are a fan of Creole music, particularly moutya, you have heard these lines countless times.

Apparently the word “moutya” comes from a Bantu word; “mutcira”, a dance in the Nampula province. Penda Choppy wrote on how this music form was used as a way to pass on history and stories orally.

Seychelles loves its music and moutya is one of the favourites. Part of the description of the music type from Marie-Claude Choppy in Women in Theatre in Seychelles paper is “one particularity of the songs is that they may be composed instantaneously on any topic of intrigue”. This is arguably a good way to pass on information to others, it is a form of narrative and if the lyrics are recorded then they are kept for the younger generations.

One of the most popular moutya songs, reworked several times by different artists tells of the life of slaves in the colonial times: “Gran blan, Msye mon bourzwa. 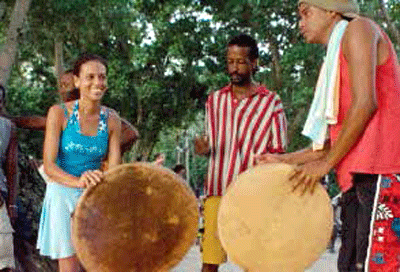 Gran Msye, retourn mwan mon fanm. Mon pa’n fer sa par mon leker. Mon fer sa pour sov ou lavi” This is a typical song that talks about how the slave is made to work very hard in the plantations from sunrise to sunset, risking his life catching fish for his master and when he gets home his children have no fish to eat. As if that was not enough, his master is having an affair with his wife against her will and she has to do it to keep her husband alive.

The harsh treatments of the workers from their arrogant masters seem to continue throughout history and young people – as young as twelve years of age are sent to work in fields to get by.

The following lyrics tells of how a very young girl had to go to work on the plantations as a very early age, at twleve years. These days, she would be in secondary one:

“Dan mon douz an, katorz an. Piti mon manman dan lakour. Al plis koko Lil Alfons. Al tir gwano Lasonmpsyon” De-husking coconuts and digging for guano was a tough job for a child. This song then illustrates the extreme poverty in which the families lived; it was such that they had to resort to child labour. In those days, workers had to obey every order given by the master. The same song continues to talk about exploitation from the master “mon lapo  edo in ize, Msye Marcel pe riye”.

“The skin on my back is worn our but Mr. Marcel is laughing”. The literal explanation would be that she was carrying such heavy loads that her clothes got damaged or she was just working too hard. Another take on the meaning is that she was being sexually abused by the master. If we were to analyse all the moutya songs in existence, there would be many that speak of such tales of despair. 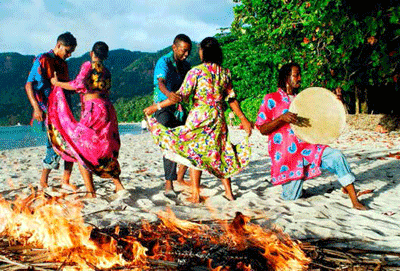 Even worse, if we were to write moutya on the scourges of today, they would all be sad songs. Nowadays, we have Facebook, back then they had moutya. If for any reason you managed to do something to irk the community you lived in, you would very likely soon hear about your own life in a moutya song. A song that depicts that very well is called “La Waneta i antre”:

“Madanm Zan anmas Lorennza,Lorennza pe fer nou onte. Simityer ti fer pour lemor, pa ti fer pou lakaz Lorennza” A song that has been recently reworked by Norville Ernesta, one of the most popular moutya artists in Seychelles. It speaks of Lorennza, who apparently had very little reserve when it came to her sex life, even using the cemetery as her bedroom. The song asked her mother to keep her in check as she was embarassing everyone. Seychellois are well known for the sarcastic messages and moutya is a form of expression that is rife with cynical expressions: “Depi ler mon’n arive, mon bat lanmen danm pa leve. Me siboudou i annan seve long, I bat lanmen danm i leve. Abe mwan mon seve lanmson,mon bat lanmen danm pa lanse.” The song alludes that since the man has arrived at the party no ladies want to dance with him, but the minute “Siboudou” claps his hand the ladies seemingly run to him because of his straight hair. He is expressing that the ladies seem to like men with straight hair rather than coarse hair like his.

Another interesting one is where other workers are talking about a brownnoser of sorts in the plantation and they see him coming, the song illustrates their disgust by insulting him: “A la Gro Makro in ariv ankor.

Ek son bel mole koman pye palmis!” Gro makro is the name they give him, makro in this sense in Creole is the word given for an obsequious person, they describe his legs as tree trunks.

Clearly, Moutya is as interesting as it is old, people are becoming more and more conscious of its historical worth and we now see regular activities centred around this music and dance. It would be interesting to see younger artists taking it up as their music type to help it live on; there is certainly no lack of topics to sing about.

2016-04-13
Georges
Previous: Superstitions
Next: “Tourism Trade and the Seychelles Business Community thank you” says Minister Alain St.Ange and Sherin Naiken, the CEO of the Tourism Board