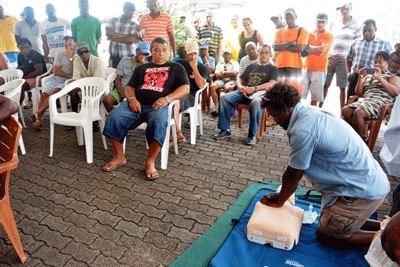 About 50 artisanal boat owners and fishers are acquiring new techniques in safety at sea and basic engine maintenance through a two-day workshop.

The training, which was launched yesterday by the Minister for Fisheries and Agriculture Wallace Cosgrow, is being conducted at the Seychelles Fishing Port, Victoria.

It has been organised by the Ministry of Fisheries and Agriculture (MFAg), through the Clissa project, in collaboration with the Seychelles Maritime Academy (SMA) following the signing of an agreement in June this year.

In basic first aid they are learning about ways to control bleeding, CPR for a drowning person, management of an unconscious person and choking, while in safety training they are received knowledge on survival equipment, their importance and uses in case of distress, as well as the type and quality of the equipment which may not put one’s life at risk.

In engine repair the two most commonly used engines were identified as inboard and outboard. The fishermen are learning about the makeup and framework of these engines, the importance of maintenance and servicing of engines and procedures to undergo in case of engine failure.

Today, the training will continue with a practical survival course where the fishermen will be taken at sea to learn how to maneuver and secure a life jacket while in a boat and inside the water along with wet drills which will give them a better chance of survival if stranded at sea.

During his welcoming remarks, PS Nalletamby said, “It is of concern to us that quite a few fishermen can’t swim and the objective of this exercise is for them to be able to protect themselves at sea.”

Minister Cosgrow said many incidents at sea could have been prevented but unfortunately many lives have been lost.

“This training will equip them and give them more knowledge on how to be better prepared if ever they find themselves in difficulties at sea,” he said.

He stated that many fishermen have some knowledge of these topics but a refresher course is good for them to learn new techniques.

Minister Cosgrow also said that his ministry is looking into the possibility to extend the training further in the future as their target is to reach fishermen and artisanal boat owners across the islands.

He also thanked all the actors involved in making this programme a reality.

2016-08-22
Georges
Previous: Electronic Monitoring System to be installed on fishing vessels
Next: Jamaican star Demarco to perform in Seychelles