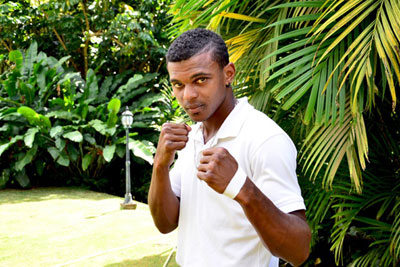 The 22-year-old Seychellois pugilist, who was competing in the 60kg category, defeated Tunisian Alaa Shili to win the bronze medal. Allisop also qualified for the 2012 Olympics in London.

“The fight was tougher than expected but I was all out for a win and to qualify for the Olympics and I did it,” Allisop said to SNA through a Facebook chat on Sunday.

“I feel proud and confident. I am happy to have made a good comeback,” he added.

Allisop was one of three Seychellois boxers taking part in the competition in Yaoundé, the capital of Cameroon. All hopes for Seychelles rested on his shoulders on Saturday as his colleagues Keddy Agnes and Jovet Jean could not push through due to injuries.

The Secretary General of the Seychelles Boxing Federation, Edmond Folette, told SNA that Allisop deserves to be praised as his Tunisian opponent who suffered a technical knock-out in his previous match managed to put up a good fight.

“The final score sheet received from the International Boxing Association confirmed that Allisop won 2-1 against the Tunisian fighter, so he really had to sweat to win and he did it,” said Folette.

Allisop becomes the third athlete from the Seychelles, a 115-island archipelago in the western Indian Ocean, to qualify for the 2016 Olympic Games taking place in Rio de Janeiro, Brazil in August.

Two sailors, Rodney Govinden and Jean-Marc Gardette, were the first to qualify.

For Allisop, this is his second time qualifying for the Olympics after qualifying in 2012 for the London Games. According to Follette, the boxing federation will now be intensifying his preparations so that he can put up a better performance in Rio.

In the 2012 Olympics, Allisop lost his fight in the first round preliminaries.

“We do not want to have a repeat of this. We [the boxing federation] will now be discussing with the Seychelles Olympic Committee and Sports Council to see what they have to offer us. We need to see about overseas training camp and high level competition so that he can develop the qualities needed to go into the Olympics in August,” said Folette.

While the two other boxers did not make it in Yaounde, Follette explained that Jovet Jean can attempt the final qualification event in Baku, Azerbaijan in June if he can recuperate from his injuries.

“There will be five places for categories up to 91 kg, which Jean falls into. For Keddy Agnes however it will be really difficult as there will be only one spot for the 91+ category, but he is listed as the world’s 8th best in his category up to February and you never know with boxing,” said Folette.

With three spots secured so far, more Seychellois athletes are still vying for a place in the 2016 Games, including high jumper Lisa Labiche. Labiche needs to clear 1.94 metres, the qualifying height, at a competition.

The others include judoka Dominique Dugasse, weightlifter Clementina Agricole and swimmer Alexus Laird.

These are athletes on the scholarship for Rio programme, although the Seychelles Olympic Games Association said recently that any other athletes can also qualify, and they can get assistance from their respective federations.