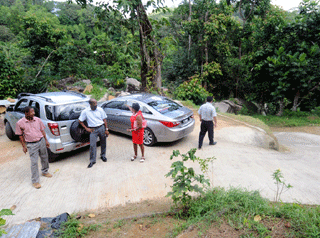 The Minister for Social Affairs, Community Development and Sports Vincent Meriton has said he is satisfied with the projects carried out in the communities of Baie Lazare.

He was speaking to the media yesterday morning after visiting several projects which are ongoing or have been completed in this southwestern district of Mahé.

Among the projects visited are the new district administration offices which will contribute to delivering a better service to the community, the second phase of the mini-gym project that will contribute to tackling the obesity problem among the youths. This project is expected to be finalised this year.

The delegation also visited new roads at Anse Aux Poules Bleues that will provide access to the population in case of an emergency.

A sum of R413,000 is being spent to finalise these projects.

Mr Meriton said his ministry is working to review and reinforce the capacity of the officers in the section which manages these projects to ensure that the money allocated for each project is spent wisely.

“Baie Lazare has shown that it is fixing its district administration office to provide better services for its inhabitants, as when you are empowering the people they need a proper place to sit and do their meetings,” Minister Meriton said.

He noted that the former offices can be given out to other agencies to provide other types of services in the community. 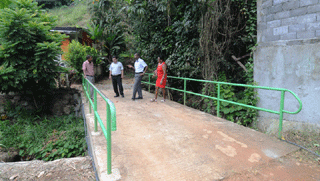 He also said his ministry is working closely with the private sector to see how they can contribute towards the success of the projects being carried out in the various districts.

“We are also working closely with people in the community as they are the ones monitoring the projects which are financed by the government,” he added. 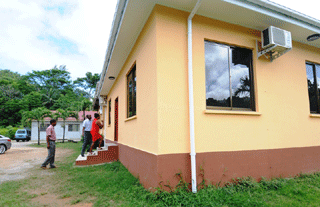 Ms Lepathy said for this year, the district has been able to complete three projects, adding that the Baie Lazare district has a close partnership with the private sector.

“We are working with the Petite Anse Developments Ltd – Four Seasons Seychelles; they are always willing to contribute towards the district’s projects,” she said.

She also thanked the Petite Anse Developments Ltd – Four Seasons Seychelles for such wonderful contribution they have made to the district of Baie Lazare and by also helping the district’s football team.

The accompanying photos show Minister Meriton and his delegation touring projects in the Baie Lazare district.