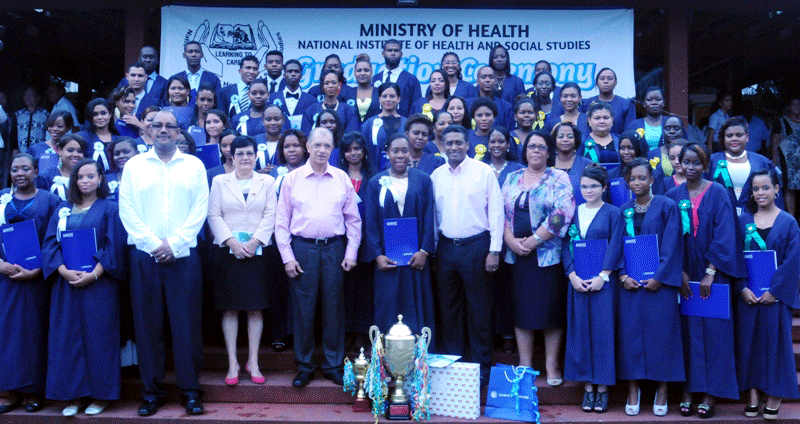 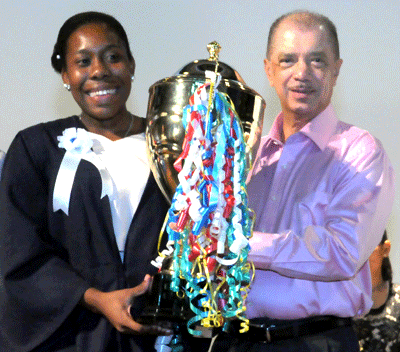 Jessenta Malbrook, a student who has just received her diploma after three years studying nursing, clinched the Outstanding Student Award during the National Institute of Health and Social Studies (NIHSS) graduation ceremony for 2015 students.

During the ceremony held yesterday afternoon at the University of Seychelles (UniSey) auditorium at Anse Royale, 58 students altogether who have completed their three-year courses received their diplomas and certificates.

Out of the group, 21 followed a Diploma in Nursing, 10 a diploma in Emergency Medical Care, 8 a Diploma in Biomedical Laboratory Science and 19 an Advanced Certificate in Oral Health Care.

President James Michel attended the ceremony and presented the Outstanding Student Award to a stunned but overjoyed Ms Malbrook, a Praslinois who has already been posted back on her native Praslin.

Ms Malbrook believes her hard work, commitment to her studies, determination to succeed in spite of all challenges and active involvement in school activities resulted in her being recognised and rewarded.

“I received a lot of support from my family and friends in spite of challenges and difficulties at first,” Ms Malbrook said.

She said to be a nurse was not her first choice but she has developed a love for the profession and now her priority “is to be able to nurse somebody and see him or her enjoy good health once again”.

She is now happy to be working on Praslin where she can enjoy family closeness after three years of student life at the youth hostel on Mahé.

Vice-President Danny Faure, Health Minister Mitcy Larue, the Speaker of the National Assembly Dr Patrick Herminie, senior members of the Health Care Agency, numerous sponsors or their representatives as well as parents were among the guests who attended the graduation ceremony, the first for this year.

Other than the Outstanding Student Award, a Best Performer and a Best In Practice Award were awarded to students who have excelled academically in their respective fields and practices.

Barbara Morel and Vernice Onyango were the best performer and the best in practice respectively for the Diploma in Nursing Course while Dudley Magnan and Marco Francourt were the two best in the Diploma in Emergency Medical Care course.

The award for the student who has showed the best effort sponsored by the Seychelles National Youth Council (SNYC) went to Martin Charlot, a student who followed a diploma course in Emergency Medical Care.

Congratulating the students for having successfully completed their courses, the director of the NIHSS, Maryline Lucas, told them to continue to cherish their three years at the NIHSS.

“Successful health workers are those who can understand the true needs of their clients and can negotiate with them. I urge you graduates to practice good attitude and empathy not as an act of charity but for you to better understand and offer compassion to others and therefore continue to grow and mature as health professionals,” Mrs Lucas told the graduates.

“Knowledge without a caring attitude is not enough in health care,” she cautioned.

Jade Simeon, a graduate in nursing, on behalf of her fellow graduates expressed gratitude to everyone who have contributed in their success.