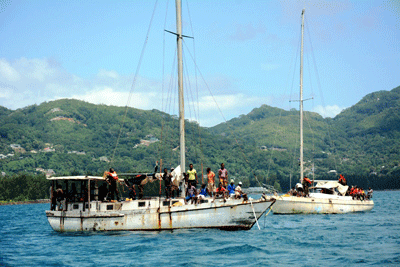 The two foreign vessels suspected of illegal fishing and which were intercepted recently by the Seychelles Coast Guard arrived in Port Victoria yesterday morning.

The two vessels – Bordeur and Soa Vahihy – are suspected to have been involved in illegal fishing activities in the Seychelles exclusive economic zone (EEZ).

They were spotted by Seychelles Coast Guard (SCG) patrol ship Etoile late on Wednesday September 30 in the vicinity of the Cosmoledo atoll, some 561 nautical miles south-west of Mahé.

Etoile came across the two vessels while on a routine patrol around the outer Islands and immediately a coast guard boarding team was sent on board to carry out a search and question the crew members.

Seychelles Fishing Authority (SFA) inspectors and the police were dispatched to the location to conduct more detailed search and collect necessary evidence.

At around 10am yesterday the two vessels were escorted to Port Victoria. Major Jean Attala said the two fishing vessels have been handed over to the police and the SFA who will be conducting further investigation.

“For now the crew members on board the two boats will stay on their vessels until further proceedings and usually it is only the owner and captain of the ships who go to court. Therefore the length of time the crew members will be in Seychelles depends on whether there is a case and the length of time any legal process will take,” Major Attala said.

According to the SFA monitoring control manager Roddy Allisop, no fish has been found so far except for a certain amount of sea cucumbers, but they are continuing their inspection of the vessels.

“We will be conducting in-depth investigation to know the species on board then we will bring the case to court where they will be charged. If the boats are detected to have been fishing illegally in the Seychelles EEZ, the owner will be fined and the vessels will only be released after payments have been made,” he said.

Mr Allisop said the fine depends on the charge and this can go up to US $45,000.

He also pointed out that this is the third case of foreign vessels reported this year to have been fishing illegally in the Seychelles EEZ. The two earlier vessels apprehended were Iranian and Indian.