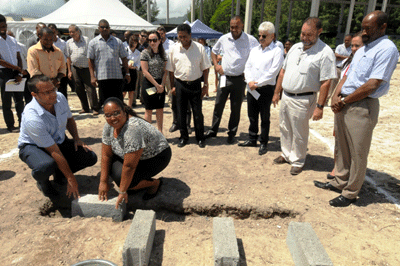 The foundation stone for a condominium project targeting young professionals and first time home buyers was laid yesterday on a specially designated piece of land at Ile Persévérance II.

Land Use and Housing Minister Christian Lionnet and Ile Perseverance district administrator Denise Clarisse laid the foundation for the project in the presence of Vice-President Danny Faure, Designated Minister Vincent Meriton, Minister for Fisheries and Agriculture Wallace Cosgrow, Minister for Labour and Human Resource Development Idith Alexander among other guests and officials from the land use and housing ministry.

The event coincides with activities marking habitat week which this year is being celebrated here under the theme Meyer Labita Pour Tou. It was officially launched on Praslin on Monday with the official opening of two housing estates.

This is the second major condominium project after the first at Union Vale. It will consist of 154 luxury apartments of one, two and three bedrooms. From the total, 100 units will be allocated to young professionals and first time buyers while the balance will be sold to interested individuals or companies at a higher cost, meaning at a cost determined by the market situation.

The project is being carried out through a public private partnership (PPP) between the government and Green Island Construction Company (GICC), through a finance, build and manage (FBM) concept. It is being financed by the Seychelles Commercial Bank but the allocation will be based on the terms and conditions imposed by the government for the targeted beneficiaries. Government also made available land at a cost of just R1 for the project.

In remarks directed to young professionals, Minister Lionnet said the Ile Persévérance condominium project is one of many such projects the government is planning to undertake. He mentioned the Beau Vallon condominium to be completed, a piece of land at Mont Signal in the Mont Buxton district which has been earmarked and of the impending delivery of the Anse Des Genets project.

He also announced a new scheme his ministry is launching on Ile Persévérance again to address the housing needs of the country’s professionals. 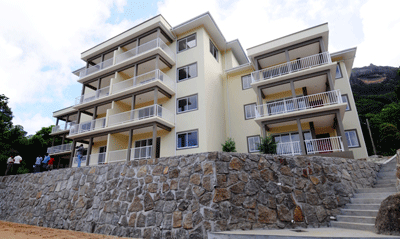 “The scheme which has been named ‘Self Build’ project will make available 70 parcels of land on the east coast of the island. You will develop these pieces of land according to your taste but in accordance with the development and planning guidelines,” Minister Lionnet told young professionals.

Minister Lionnet also spoke of another six parcels of land for mixed commercial developments which he described as ‘Rental Pool’ comprising about 180 units. Pension Fund has been allocated a plot to build apartments to rent while negotiation is ongoing with Sacos, another company which provides housing facilities.

A secondary school and medical centre to provide specialised care for women and children are also being planned on Ile Perseverance.

Minister Lionnet also highlighted the successes that have been achieved on the island until now, saying the government has invested about R900 million in building houses and other infrastructure such as roads, school, drainage, sewage system and bridge. He noted that this does not include reclamation, water, security and defence investment costs.

“1,020 families have benefitted and soon more will also benefit. Economic activity is also happening on the island where land has also been allocated to the private sector for commercial or industrial developments,” said Minister Lionnet.

He also had words of praise for Housing Finance Company (HFC) which was established in 2004 to make access to affordable credit easier for Seychellois to either build or renovate their homes. The Home Saving Scheme, established in 2006, is another success story where for the last five years Seychellois families have contributed R97 million towards their own homes.

Ile Perseverance II district administrator Denise Clarisse said the 154 luxury apartments to be built in her constituency will bring the government a step closer to achieving its goal of ensuring decent housing to all its citizens.

GICC chief executive Glenny Savy said the project has taken a while to develop and has encountered many challenges as they needed to get it right.

Ziggy Adam, chairperson of the Seychelles National Youth Council, had words of thanks for the government for realising such projects.

Meanwhile, in November 2013, the government began a smaller project converting an ex-social housing site at Anse Des Genets, Cascade, into a small condominium project to be allocated to young professionals predominantly from the districts of Cascade and Pointe Larue.

It comprises 14 apartments – eight two bedrooms and six three bedrooms. They are to be allocated to the tenants soon.

A tour of the project led by the principal secretary for project planning and implementation, Yves Choppy was organised yesterday afternoon. It was to see what still remains to be completed before the units are allocated to prospective tenants.