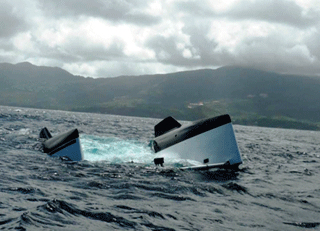 Efforts were underway yesterday to salvage a catamaran that capsized off Cap Lazare in the south-western part of Mahé on Wednesday afternoon, with no casualties.

The Lagoon 440 ‘Zebra Moon’ belonging to the Seychelles fleet of Dream Yacht Charter was carrying five people at the time.

Pascal Durand, the manager of Dream Yacht Charter in Seychelles, confirmed to Seychelles News Agency that the five people, who are all German nationals, were able to come out unharmed.

According to Mr Durand, the catamaran was heading from the south-western part to the north-western part of Mahé and that the incident was reported at around 2pm.

In an emailed statement to Seychelles News Agency, Mr Durand said his clients explained to the police that they were all at the helm station upstairs when the boat‘s electronics suddenly stopped working, soon followed by the engine.

“The skipper decided to go down and noticed when he entered the boat that it was taking on water… they just grabbed the life jackets and decided to put on the water the dinghy…” read the statement.

The five persons then received the help of some local fishermen nearby to get back to shore.

Mr Durand explained that only the front part of the hull was visible when they reached the location about an hour and a half after the incident was reported.

He added that steps were taken including the setting of mooring lines to ensure that the boat did not drift further away throughout the night considering the sea was a bit rough at the time.

The exact cause of the incident is under investigation by the boat charter company.

2015-07-10
Georges
Previous: Police to boost up patrols with new vehicles
Next: Seychelles urged to be a model in project fund use