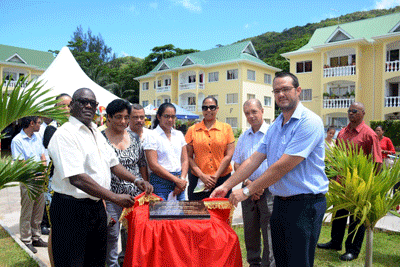 Activities to mark Habitat Week 2015 in Seychelles were officially launched yesterday on Praslin.

The highlights were the inauguration of the Karl Tamatave Estate at Grand Anse Praslin and the handing over of keys to twelve families of the newly opened Ex-Teachers’ Housing Estate at Amitié.

Also on the programme were visits to two newly built sewage treatment plants at both the Karl Tamatave Estate and Moulinie Housing Estate as added infrastructure to these estate and other development projects nearby.

Another project in the pipeline is a 12-unit housing estate which will be constructed nearby.

Although the United Nations’ theme for World Habitat Day is ‘Public Spaces For All’, here in Seychelles the day is being celebrated under the theme ‘En Meyer Labita pour Tou’ which Seychelles believes is a more practical theme to suit its local needs.

Guest of honour at the inauguration of the Karl Tamatave Estate was President James Michel who also attended the unveiling of the commemorative plaque by the Minister for Land Use and Habitat Christian Lionnet and Moses Barbé, district administrator for Grand Anse Praslin. 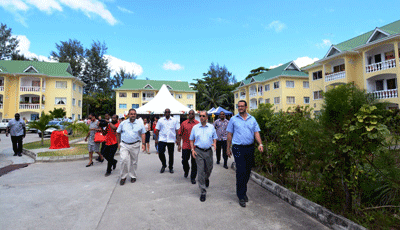 Also present at those events were the principal secretaries of the ministry – Joseph Francois of land use & housing and Yves Choppy for project planning and implementation; the member of the National Assembly for Grand Anse Praslin district, Marc Volcère; the widow and two daughters of the late Karl Tamatave after whom the estate has been named; other high officials and staff of the Ministry of Land use and Habitat (MLUH) and inhabitants of the estate.

World Habitat Day, designated by the United Nations to be the first Monday of October every year, is for the leaders of the world, government, civil society and non-governmental organisations as well as citizens to reflect on one of the most basic needs of life, a habitat.

The Karl Tamatave and Ex-Teacher’s housing estates are the two biggest housing projects that MLUH have undertaken in the Grand Anse Praslin district. Both projects started some time back – Karl Tamatave in 2004 and it was done in phases from 2006-2008. There are 48 units in all and the delay was caused by sitting tenants and financial constraints due to the 2008 economic reform.

Another smaller scale housing project, a six-unit project, is planned for next year at Mont Plaisir in the Grand Anse district.

The Karl Tamatave Estate has cost R22 million while its sewerage treatment plant with a capacity of 50 cubic metres has cost R5m million. The Ex-Teacher’s housing estate has cost R24.1 million.

The larger Ex-Moulinie sewerage plant with a capacity of 100 cubic metres has cost of R9.3 million.

Minister Lionnet and his delegation also inspected the Marie-Jeanne Estate housing project, which is expected to be completed this year or early next year.

It consists of six blocks of flats comprising 36 units. Construction of two blocks among the six has started and they were those that the minister visited.

Speaking at the Karl Tamatave estate, Minister Lionnet commended the tenants of the estate for their community spirit, cleanliness and good neighbourhood values. 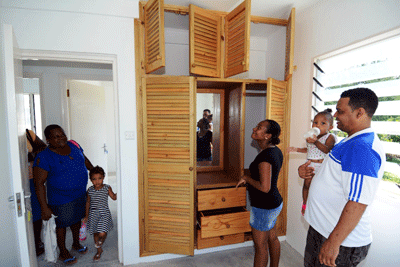 “This 2015 Habitat Day is an occasion for us to remember those who have contributed towards the development of our country especially the President of the Republic who has dedicated his life for the development of his country,” said Minister Lionnet.

He also paid tribute to the late Karl Tamatave who died in January 2008. Though he never had the opportunity to meet the man, he has heard that he dedicated his life to the people of Grand Anse Praslin.

He said the estate is one of the various initiatives by President Michel, Karl Tamatave and Michel Gardette.

He urged all who aspire for a house to contribute unwaveringly towards it; those who already have one to do their repayments faithfully and those waiting to have patience as their turn will come.

The minister and his delegation then inspected the two treatment plants.

MNA Volcère reminded those present that all those benefits they are enjoying today is the result of the hard work of the current government.

Jenny Bresson, an inhabitant of Karl Tamatave estate, expressed her appreciation and gratitude for having obtained her own house.

She said it is proof of the hard work of the government to improve the life of the more vulnerable people in the society. She was extra happy that her house will become hers after completing her payment.

2015-10-06
Georges
Previous: UniSey and the Judiciary seek closer cooperation
Next: Seychellois with Indian origins honoured in the Wall of History that is set to recognize the five historical lines of the Seychellois people