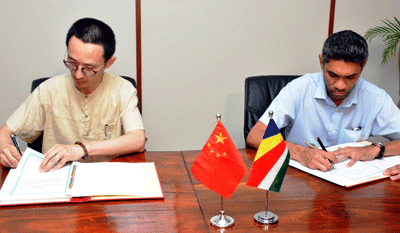 The third phase of construction of the new Corgat Estate Housing Estate project will start at the beginning of next year.

The contract for the construction works was signed earlier this week between the principal secretary for project implementation in the Ministry of Land Use and Housing (MLUH) Yves Choppy and the first secretary in the Chinese embassy Francis He.

As for the first phase which started in 2007 and the second which is already completed with a total of 32 housing units, the People’s Republic of China is financing the third phase of another 32 three-bedroom units, at a cost of around R54 million.

Mr Choppy commented that the signing of the agreement represents another important step in improving the housing conditions of the Seychellois people.

“The project is another testimony that the government is committed to improving the people’s social conditions. I know that the future beneficiaries are impatiently waiting for the completion of the project,” he said, as he thanked the Chinese diplomat for his country’s support.

Mr He expressed his country’s appreciation for participating in Seychelles’ social housing programme. He insisted that while China has already invested a lot of effort in the Corgat Estate project, there is still a lot of work ahead.

“But when finished it will greatly help to improve the housing conditions of the people,” he concluded.

MLUH has announced that the reconstruction of the Corgat Estate Housing Estate, which dates back to the colonial era, may go into another three to four phases. This will depend on the ministry’s capacity to relocate the actual inhabitants as works go along.

Work on the third phase is expected to be completed in 2019.