‘Sensationalism at its worse is cheap’ 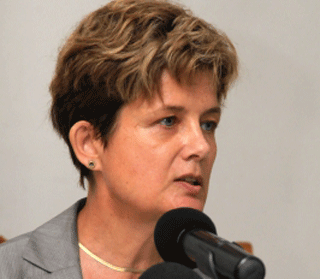 “Sensationalism can either be very clever word-smiting where you get the right kind of headline to get your buyer hooked. And it can also be cheap charlatanism.”
Experienced journalist Jacky Sutton, who has spent almost two decades working with the United Nations in war zones around the world, said this to Seychelles NATION in an interview this week.
Ms Sutton had chaired a seminar this week on the importance of reporting judicial and police investigations in the media organised by the Seychelles Media Commission in conjunction with the United Nations Development Programmes.

Seychelles NATION: What is your impression of local media following this seminar?

Ms Sutton: This was an opportunity for the media to engage in a dialogue with the judiciary, the police and also to understand a little more clearly their responsibilities and rights when it comes to exercising their freedom of expression and access to information. I don’t think there was never a moment where communication is irrelevant or redundant. And this was another communication opportunity for people to clarify the relationships between all these component institutions in a democratic society.

Seychelles NATION: You’ve worked in many countries. Do you think the situation there is the same as in Seychelles?

Ms Sutton: I sincerely hope not. Most of the time, I’ve been working in countries like Afghanistan, Iraq and Gaza, and I would never wish those situations on any country. The consistent thing that I’ve seen across the years that I’ve been working both as a journalist and as a development intervener with the United Nations is that the media profession is generally very young in both the age of its practitioners and also as technology is always evolving we are always running against the curve. I started journalism in the pre-digital era. We got the internet at the BBC (British Broadcasting Corporation) in the 1990s.

Journalism is a young and curious profession. Naturally people become journalists because they want to ask questions, listen to people, want to challenge the authority in a positive way. That’s across the board. The difference in all these cases has been how government responds to them. Unfortunately in fragile states, post-conflict environments such as Afghanistan and Iraq, governments’ response has often been to clamp down on information. They haven’t had the exposure that a non-crisis state has had to information technology. So they think they can shut down information and of course that doesn’t work. The response generally tends to escalate very quickly.

Here what I’ve seen, and I think this is very positive, is there is an understanding of the faults of each other. A senior superintendant of the police (François Freminot) apologised for the fact that the police make mistakes. We are all humans. Journalists, politicians make mistakes, but I think that we understand that we can make mistakes and not be hounded. There is a difference between making a genuine mistake and lying to cover up a mistake. If you make a mistake and you are in an environment where you can say: “Sorry I made a mistake, mea culpa”. Move on and learn from that. That is a positive media environment. You also have authorities who want to establish frameworks to keep that partnership consistent – and that’s the right to information legislation which is fundamental – the notion that you can have an independent regulator that has sanctioning powers, a police force, attorney general’s office and judiciary that acknowledge their responsibility to accountability.

Seychelles NATION: Before coming to Seychelles, did you have any idea of the level of journalism and the issues discussed during the seminar?

Ms Sutton: I knew, unfortunately coming from Afghanistan where there is a huge drug problem as it is the world’s number one producer of opium which ends up as heroin on the world market, that Seychelles has a problem with heroin. Where you have that then you have big and unaccountable money, corruption at various levels. Where you have that you have a media sector that has a vital role to play to expose that corruption. The media has to ensure that its practitioners are safe while they are doing that and safety is not only about dodging bullets, it’s also about being responsible, knowing the red lines, knowing when it’s important to push them, knowing your legal safeguards and rights. For that I kind of knew that Seychelles would have these issues. What I didn’t expect was to see how really committed the media are to ensuring that they can exercise their rights but also acknowledge their responsibilities.

Seychelles NATION: But what do you think should be done then to improve the level of journalism here?

Ms Sutton: I think there is a demand for training on the part of the media, there’s technical training such as legal reporting, election reporting and how to use the social media. Getting an independent media regulator that does have sanctioning power is very important. Having the authorities, whether it’s the police, judiciary, government, attorney general’s office, political parties acknowledging their responsibility to be transparent is also very important. Having the right regulatory and legal framework, particularly right to information law, is absolutely essential. All of these elements are coming together in Seychelles, so what you need is a partnership that all component parts recognise that they can all help each other without necessary colluding.

Seychelles NATION: Social media as said during your presentation is the new paradigm of the media. Can you elaborate?

Ms Sutton: For the first time in human history we have a situation of too much information transmission in real time. What I am saying to you now may be transmitted to millions of people, it’s out of control. Before, if somebody wanted to investigate a sexual abuse of a minor they would have to come to Seychelles, go to the court house, go through the paper and find it. It would take a lot of effort, money to get what they were looking for. Today you can stumble on something on Google on the other side of the world. That means our right to privacy is compromised by the fact that technically technology does not recognise rights. My privacy does not exist online if I had not taken precautions which I need to know about in order to protect my privacy.

That also has implications for mistakes. If I make a mistake and I accuse somebody of a serious crime or I imply wrongdoing on someone else’s part their reputation can be ruined in a moment. And I might not even know that I have ruined their reputation. So journalists, politicians and people in public office have a responsibility to their speech acts. And we have to understand what these responsibilities are because they’ve changed. I might sit and say something to you sotto voce but it’s being recorded and transmitted, so that off-the-record kind of space has got to be more zealously guarded and I have to trust you more and you need to earn my trust more. That means as journalist the ground rule remains the same: fairness, accuracy and timeliness. Those are enduring baselines for human communication, but they become even more important and even more fragile as technology develops.

Seychelles NATION: Some critics say that with the social media we are all journalists…

Ms Sutton: Yes and no. In the 1980s with the new world information order it was very clear that developing countries as they were called then, wanted to challenge the hegemony of northern European and northern American newsroom which created, manufactured and filtered the news. Now the news is much more egalitarian in a way but there is a great difference between social media’s chatter, unsubstantiated, unfounded information and the editorial policies of professional newsrooms. This is while newsrooms which have embraced social media substantiate the feed they receive from citizen journalists. News taken out from Iraq, Afghanistan and other warzones are taken by citizen journalists but are double-checked by professional journalists before they are broadcasted.

Seychelles NATION: What is your opinion of sensationalism?

Ms Sutton: Sadly, dog bites man doesn’t sell but man bites dog sells. That’s a fact. There’s news journalism which is hard news and is looking for the man biting the dog. On the other hand you can look at the feature side and you can look at the colour of the dog. There are different ways at looking at journalism. Sensationalism can either be very clever word-smiting where you have the right kind of headline to get your buyer hooked. And it can also be cheap charlatanism. I can go into a shop and buy the most beautiful

object and it falls apart tomorrow, that’s charlatanism (it’s not real) or I can go and look for something that could last me for years. Like everything you can get the cheap stuff or the real stuff. Sensationalism at its worse is cheap, specious, nothingness.

Seychelles NATION: Finally, many people talk about freedom of expression. What is the extent of this freedom?

Ms Sutton: Freedom of expression is not an absolute right, it is a fundamental right. For example, if I walk up to a stranger and say: “My goodness you are really ugly”. It might be true but is it appropriate? What impact is that going to have on that person who has just been told he is ugly? So freedom of expression is a right that has to be weighed with the right of others and the right of society as a whole. The role of the media is to push the boundaries of that right as it is a right to push a right. The role of the authorities, attorney general and individuals is to push back and say to journalists no you don’t have that right. Because the consequences is your unbridled exercise of the right is the denial of someone else’s right – be it to reputation or in a worst case scenario to life.