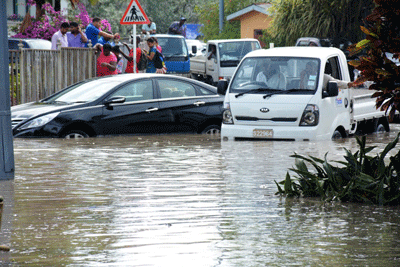 One of three large circular water tanks at the Indian Ocean (IOT) canning factory at the Fishing Port in Victoria burst yesterday morning, causing flooding which led to traffic chaos and damage to surrounding properties.

Luckily there were no fatalities and injuries.

An investigation has started to determine what caused the tank to burst.

Large volumes of water and debris poured onto the street up to the Bicentenary Monument causing workers from nearby buildings like Amusement Centre, Ocean Gate House, STC vegetable wholesale and Seychelles Nation to temporary vacate their offices as rumours of a ‘tsunami’ spread like wild fire among onlookers.

The Seychelles Electronics Maritime Company Ltd, which houses different businesses and services for mariners, fishermen and other seafarers on its ground floor situated just opposite the water tanks on the other side of the road, suffered a lot of damage as did a number of the company’s and staff vehicles.

Peggy Carosin, the company’s general manager, said three staff who usually work in the Raft Service Station on the ground floor of the building narrowly escaped being injured or event death.
“It was just around 9.15am when there was this loud thunderous noise like an explosion and in a few seconds it was chaos. But luckily there were no clients and the metal shutters were down and this I believe shielded the one member of staff present in the station at that time who managed to dash up the stairs to safer ground,” Ms Carosin said.

“It was a miracle the way a staff in an adjacent office managed to escape. She had just left her desk which faces the tank to go to the store at the back and it was at that time that the tank burst, sending pieces of glass from the shattered windows everywhere and dragging her chair into another room,” a visibly shaken Ms Carosin explained as she pointed to the damage.
The lady sought medical treatment for shock.

Officers from the Fire and Rescue Service Agency were called in to pull to safety vehicles which were on the road at the time of the flooding while the police tried to control traffic to the affected zone. They also pumped water into the sea as debris had blocked already clogged drains in the area. The fire brigade pumped water until early afternoon.

A communiqué from the IOT confirmed that one of the company’s water tank had burst but luckily no injuries had been reported but potable water and electricity to the factory had been affected.
“The IOT has shut down all major tuna processing operations to assess damages caused by the incident,” the communiqué said.

It added that employees not required on site for specific emergency tasks are advised to stay away from the factory during the weekend and Monday August 31 but they are requested to stay tuned to Seychelles Broadcasting Corporation (SBC) radio for further instructions.

The Division of Risk and Disaster Management (DRDM) has said a team made up of different concerned agencies and services will visit the site this morning to assess the situation.