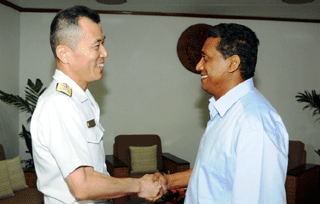 Speaking to the press after his meeting with VP Faure, Commander Ito said it was an opportunity to discuss issues related to counter piracy in the region, the Gulf of Aden and off the coast of Somalia.

Noting that the mandate of the EU (European Union) and Nato (North Atlantic Treaty Organisation) forces in the region are expected to end in December 2016, he discussed the issue as well with VP Faure.

“I had a very fruitful discussion with Vice-President Faure and we discussed the way forward for our operation  for the coming years since the EU and Nato forces’ mandate are  expected to end in December 2016 .We exchange our views and concern on what will happen beyond 2016,” Commander Ito said.

As it is the first time that Japan takes command of a multi-national force in the post-war period, Commander Ito said it is an important moment for Japan and a great opportunity for him.

He added that he has under his command, apart from fellow Japanese servicemen, officers of different nationalities and he is happy as he is receiving their full support so that he can discharge his responsibilities very well.

While CTF 151 has counter piracy as its mission, Commander Ito said he is focusing his attention on maintaining the number of ships and aircraft in the force to patrol the area in the Gulf of Aden and off the coast of Somalia.

But the commander noted that the CTF 151 also collaborates with the shipping sector, helping and keeping a watchful eye on merchant vessels which cross the region.

In addition to its new responsibility to command the CTF 151,  Japan has a counter-piracy base in Djibouti, used by two aircraft (P3-C Orion) and two destroyer vessels under the Japan Maritime Defence Force.

Seychelles and Japan also concluded a transfer of suspected pirates agreement in December 2014.