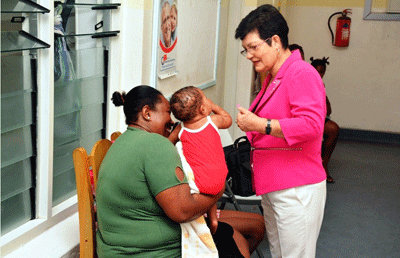 Plans are underway for a new hospital to be built on La Digue island with preliminary works starting off as of 2018.

Health Minister Mitcy Larue made this announcement while on a working visit with a high level health delegation to the Logan Hospital over the weekend.

The visit coincided with the official opening of the new mortuary on the island.

Accompanied by her principal secretary Dr Bernard Valentin and Health Care Agency Board chairman Ambassador Maurice Loustau-Lalanne and other senior community health nursing and health policy officials, the delegation met staff of the Logan Hospital to look at issues affecting the health treatment and medical services delivery to the inhabitants of La Digue.

Minister Larue and her delegation noticed that there was no admission of in-patients in the wards and she praised the Digwa for living healthy lifestyles and taking into consideration healthy eating, exercise especially as most of them are physically fit due to riding bicycles which is the main source of transport on the island.

The Logan Hospital nursing officer, Ginette Freminot, briefed the minister and her delegation on the different medical treatment and services being given at the hospital such as consultations, visits of medical specialists from the Seychelles Hospital and the Baie Ste Anne health centre on Praslin and this ranged from dental, oncology, paediatrics, ante-natal, mother-child health care, among many other specialised services. 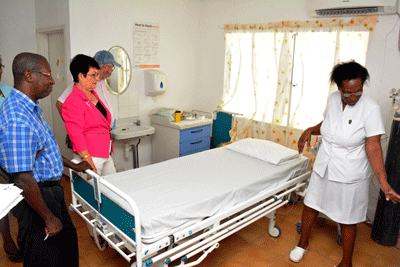 The health delegation also interacted with patients attending consultations with doctors on duty.

Minister Larue also explained that the Seychelles government, in close liaison with the Ministry of Health, had already started looking at finding a new location to build a new hospital as a replacement of the current Logan Hospital

“Through consultations we have found out that the people of La Digue want the new hospital to stay on the same site due to the proximity of its centralised location which they have been accustomed to over the past decades,” Minister Larue said.

She said when the preliminary works start off in two years’ time, the construction works will be done in two phases so as not to disrupt the medical services at Logan Hospital.

The health ministry is yet to decide on the construction components of the two phases and what each phase will consist of.

Meanwhile, Minister Larue officially inaugurated the new mortuary on La Digue last Friday, and this long-awaited service has been most welcomed by the island’s community.