The delegation during their site visit yesterday

High officials of the Ministry of Education and the Seychelles Land Transport Agency (SLTA) yesterday visited the site where the new La Rosière school is to be built.

According to the consultant of projects in the ministry, Jones Belmont, the new school will consist of four streams, with all necessary facilities such as school hall, dining hall, dentist room which is currently in the caravan in the school compound. There are twenty-four classrooms, with four class rooms for each level. 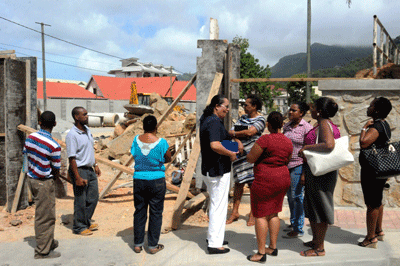 bring children to the school. The new road has been built from land gained from the school premises as it complements the La Rosière school project.

Present at the inspection visit were the two principal secretaries of the ministry – Merida Delcy for early childhood, primary and secondary education and Dr Linda Barallon for post-secondary education, planning, human resources and infrastructure development; Parinda Herath, chief executive of SLTA, headteacher of La Rosière school and other officials.

“The road project is not completed. The civil work is about 90% complete. It remains for us to build a culvert across the road at the junction leading to Olivier Maradam Street. Then we will resurface the whole area before marking and putting up appropriate signage. Then we will open it for use by motorists,” said Mr Herath when explaining the road project.

Many vehicles were already parked on the new road but Mr Herath said it is not a parking area as the future markings and signage will indicate. There will be another lay-bye on Hangard Street adjacent to the school for the same purpose.

The road project is expected to be completed in a month’s time but SLTA has experienced some delays due to mainly ongoing projects around the area which the agency had to wait to be completed.

As soon as the current contractor building the road remove their building materials from the school redevelopment site, work on the new La Rosière school will start. The contractor had to use the school compound otherwise their materials would impact on the building work of the road itself.

This was explained by Mr Belmont when giving an overview of the new La Rosière school.

“Once this is completed and the contractor moves out, we will be able to start the construction of the new school,” said Mr Belmont.

In the meantime they are doing all the drawings before developing the final plan.

The redevelopment of the school is being undertaken on the previous school site. The project is jointly funded by the government of Seychelles and the Kuwaiti Fund for Development. A foreign consultant will arrive in the country soon. He was chosen by Kuwait after lodging an international tender for the project in association with local consultants.