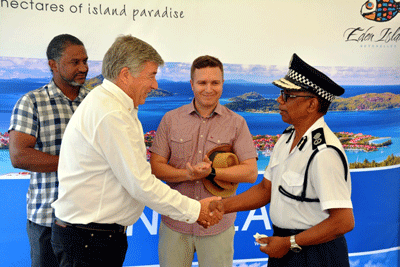 The Marine Police Unit now has a permanent base on the east Mahé coast.

This follows the opening yesterday of a satellite station at Roche Caïman, opposite Eden Island.

The new facilities, which have been sponsored by Eden Island Development Company (EIDC), add to the unit’s headquarters on Bois de Rose Avenue and another station on Praslin.

Consisting of an office, a cell plus shower and toilet facilities, they are equipped with communication and first aid equipment. Two speed boats are also permanently based there.

EIDC’s sales and marketing director Peter Smith handed over the keys of the conveniently converted 40 feet container to Commissioner of Police Reginald Elizabeth in front of what is now a smart small building. Commenting that we do not always need impressive facilities to be efficient, Mr Elizabeth in turn commissioned it to Marine Police commander, Sub Inspector Aubrey Petrousse. 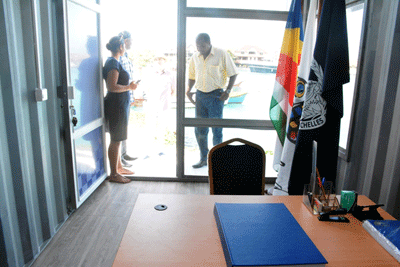 He added that the new facility which will help expand maritime law enforcement capabilities and extend services to the public highlights the strong partnership between the government and private partners in enhancing safe and secure coastal waters.

“Policing the maritime environment is a critical component in the nation’s security strategy. A strong and sustained maritime policing capability will safeguard the security of all,” he insisted.

Mr Smith was in agreement that the facility will counter illegal activities in the area.

“The facility will benefit all seafaring folk in Seychelles by providing policing services around Victoria and east Mahé,” he said.

Looking forward to better cooperation in the future, he thanked the Seychelles Police for the partnership.

Boat owners, fishermen and mariners in general from the Roche Caïman area have also expressed their appreciation for the satellite station which will be manned by seven officers on a 24-hour basis.

The chairman of the Roche Caïman Fishermen’s Association Florent Etienne has said he is hopeful that illegal activities in the area such as thefts and speeding will now stop.

2016-08-22
Georges
Previous: Jamaican star Demarco to perform in Seychelles
Next: 16 hours at sea: Seychellois man who saved 6-year-old says a promise to his dying girlfriend saved their lives